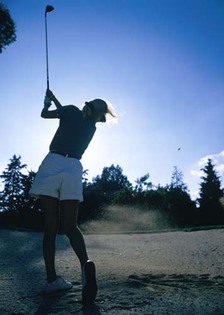 When government funds are used to finance or operate golf courses, taxpayers often end up in a trap.

Municipalities often own and operate businesses in direct competition with the private sector. According to the Michigan Golf Course Owners Association and Mackinac Center research, about 91 Michigan golf courses are owned by various units of government, including seven owned by state universities.

Government golf is unnecessary, unfair to private entrepreneurs, and needlessly expensive. Proponents claim that government golf is necessary to ensure access to low-income duffers (and others), preserve green space, and even generate income. Their arguments are belied by a host of evidence, both anecdotal and empirical. Government golf courses hurt taxpayers and the owners of Michigan’s 823 privately owned golf courses.

As citizens and taxpayers, we should be asking ourselves: Is golf one of the legitimate functions of government?

There are 22 government-owned golf courses in Oakland County — more than any other Michigan county — including one owned by the city of Detroit (Rackham). Oakland County is one of the wealthiest counties in the nation, which makes it difficult to argue that these courses are needed to keep the game affordable.

Oakland’s $13.4 million Lyon Oaks Golf Course in Wixom opened in 2002. According to county officials, the acquisition of land for the course and park was made possible through three state grants worth $2.4 million, and the construction was financed through the parks department’s capital improvement fund. Construction of the clubhouse, pro shop, and banquet and meeting space were financed with $5.1 million in bonds.

First, government competition is unfair. A municipality may build or subsidize a golf course with tax dollars taken from the private course owners they compete against. In addition, the government often has the option of assigning workers paid by one department to a municipal golf course run by another. Government golf courses are also not saddled with property tax burdens.

One former owner of a golf course in Commerce Twp. stated that he paid $200,000 a year in property taxes while the local municipal courses paid nothing. This made competing difficult enough, but his government-owned competitor also ran $10 specials for 18 holes of golf. He was effectively driven from business.

Among owners of golf courses in Southeastern Michigan, Lyon Oaks Golf Course is a frequent topic of conversation and criticism. The most common complaint of this particular facility is its size and high quality, including its amenities, such as the clubhouse.

In the past, private owners have been able to better differentiate themselves from government golf courses by providing superior courses and other amenities, but Lyon Oaks strips away that comparative advantage. Municipal courses have also been adding beer and liquor sales to their services, giving customers another reason to choose government golf over private sector operations.

Government golf is also unfair to people who have no interest in playing the game but are forced to subsidize it with their taxes.

Second, government golf is unnecessary. Interest in the game has waned in recent years and some courses are closing simply due to insufficient demand.

Empirical evidence suggests that the sport would benefit if government would stay out of the business. In the 2004 edition of "International Journal of the Economics of Business" a study by economist and author of the book, "Golfonomics," Stephen Shmanske, assessed the impact of 104 golf courses in the San Francisco Bay Area between 1893 and 2001. Shmanske found that municipal golf courses deterred the entry of other courses, and that government golf reduced the number of golf courses in San Francisco. Shmanske recommends privatization to increase the number of golf courses and golfers.

In 2006 the Michigan Legislature should draw a legal line in the sand trap. First, it should outlaw direct competition between government and legitimate business, as Pennsylvania is trying to do. Second, it should mandate cost accounting techniques for all units of government operating golf courses so taxpayers could more easily understand the true cost of the activity.

Government golf is unfair to taxpayers and golf course owners and may actually lower the amount of greens and golfers in the state. Municipal courses should be sold to the highest bidder. Short of that, the state legislature should step in and protect taxpayers and private businesses from future losses and from unfair competition. And as citizens and taxpayers, we should be asking ourselves: Is golf one of the legitimate functions of government?

Michael LaFaive is director of the Morey Fiscal Policy Initiative at the Mackinac Center for Public Policy, a research and educational institute headquartered in Midland, Mich. Permission to reprint in whole or in part is hereby granted, provided that the author and the Center are properly cited.