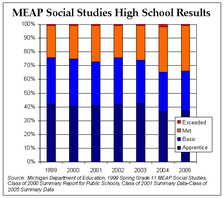 Speaking to the Michigan Board of Education, state Superintendent Mike Flanagan declared Nov. 15, 2005, “an historic day.” Gilding his announcement with Crosby, Stills and Nash’s “Teach Your Children Well,” Flanagan announced that new-and-improved graduation requirements would “change the face of public education.”

With the aim of creating a more skilled workforce, the superintendent unveiled a proposal that would require Michigan students to take a total of 16 credits, distributed over various subjects, before they can receive a high school diploma. The State Board of Education approved that plan with minor modifications and added two credits of foreign languages, for a total of 18 required credits.

Given state bureaucrats’ lack of success implementing the law’s one existing requirement, we should not place much hope in an additional mandate to fix public education or improve the economy.

One of the current problems these requirements are intended to fix is the high need for remedial education. In fact, a study released by the Mackinac Center for Public Policy in 2000 estimated that the cost to Michigan businesses and post-secondary institutions of re-educating high school graduates with basic skills is more than $600 million every year. To test whether higher state graduation requirements would solve this problem, we can analyze the effectiveness of the current standard. If we accept the logic employed by proponents of more graduation requirements, the current state requirement should be producing students who demonstrate exceptional competency in civics.

Social studies comprises a significant part of the Michigan Educational Assessment Program test taken by Michigan 11th graders. From 1999 to 2005, an average of only about 28 percent of test-takers met or exceeded state standards in social studies. This means that, on average, nearly three-quarters of students who graduated from Michigan public high schools in the past six years did not meet the state’s standard for knowledge of basic economics, world geography, and the history and institutions of the United States and Michigan. Admittedly, not each of these areas is required by the state for graduation, though they may be by local districts.

Civics knowledge comprises one “strand” of the social studies assessment, although several other questions relate to civics generally. For two of the last six years (the tests administered in 2001 and 2002), the Michigan Department of Education provides data for each area assessed on the social studies test, including civics. In 2001, an average of 62 percent of responses to multiple choice questions in civics were correct. In 2002, the average percentage of correct multiple choice answers to civics questions dropped to 46 percent. These percentages are not the best indication of student performance in civics because there were only five questions on each of these two tests that were specifically civics-related. However, each question required only the most basic knowledge of American government.

These basic data call into question whether Michigan’s single graduation requirement has increased competency in a way that advocates of the new proposal posit their standards will do. This simple analysis tracks with more general research. Data on teachers and student performance from the U.S. Department of Education indicate that over the past 30 years, increasing the time spent by secondary school students in core subjects has not yielded higher student achievement in those areas.

The debate over graduation requirements is significant — high standards are an important part of excellent education. But given state bureaucrats’ lack of success implementing the law’s one existing requirement, we should not place much hope in an additional mandate to fix public education or improve the economy. Legislators must keep this in mind when they consider whether to impose the state board’s policy on Michigan students, who would benefit far more if their parents were able to choose the courses and schools that best suit their needs.

Ryan S. Olson is director of education policy at the Mackinac Center for Public Policy, a research and educational institute headquartered in Midland, Mich. Permission to reprint in whole or in part is hereby granted, provided that the author and the Center are properly cited.