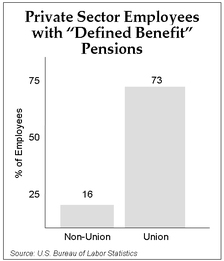 Firms with strong unions are frequently saddled with “defined benefit” pensions that can be a factor in company competitiveness.

Without reform, public school teacher pension plans will become as unmanageable for taxpayers as autoworkers’ pension plans are for the Big Three. Yet when considering legislation designed to address the problem, the Michigan Legislature decided to punt, ignoring proven reforms.

It’s not like the pension crisis is a matter of conjecture. Local governments and corporations have seen the writing on the wall and are responding in real time.

In December, The Detroit News reported that in order to cut costs, city and county governments are moving away from defined benefit plans, which guarantee employees a set monthly payment when they retire. A Wayne State University finance professor told the News, “Defined benefit is going to go the way of the dinosaurs.”

When it comes to defined benefits, corporations and municipalities have seen the warning signs and are changing course to avoid getting burned. Public school employee unions and their allies in Lansing would be wise to do the same.

Earlier in December, Verizon Communications announced it would freeze its defined benefit plan and instead expand its defined contribution, or 401(k), plan. According to Verizon, the change would affect 50,000 managers and save the company around $3 billion over the next decade.

In response to the unpredictable legacy costs that are burdening school districts throughout the state, the Michigan House tried to address the same problem in early December. For nine hours the House debated a bill to bring newly hired Michigan teachers in line with other public employees by providing them with a defined contribution plan. Unfortunately, the legislation was defeated.

Employees have long valued retirement benefits. Employers have met this demand in essentially three ways: pay workers enough so that they save on their own; organize a contribution-based benefit, where employees, and often the employer, pay into a special retirement account owned and managed by the employee; or promise to provide an employee a certain level of benefits upon retirement.

Public school teachers are able to choose between options two and three. The bill considered by the House would have moved new school hires to the defined contribution system, putting teachers in line with most other employees. According to 2005 data from the federal Bureau of Labor Statistics, only 22 percent of private sector employees receive a defined benefit plan for retirement. It’s easy to see why. No employer can predict the future or realistically promise an employee, “If you stay with us through the years, when you retire I’ll guarantee specific benefits for the rest of your life.” There are too many variables outside the employer’s control.

As a result, firms with strong unions — General Motors and Delphi are prime examples — are often saddled with expensive, unpredictable, benefits that most other employers — Toyota, for instance — simply do not have to contend with.

The uncertainty surrounding promised future retirement benefits is not just an employer-employee problem. Should a company with a defined-benefit plan become insolvent and file for bankruptcy, its retirement obligations are often discharged. If the company has participated in the federal program guaranteeing pensions — which is itself massively underfunded — then taxpayers will be burdened with much of the cost. Likewise, should Michigan’s teacher retirement benefits prove unworkable, it’s likely that the taxpayers will be asked to pick up that tab as well.

When it comes to defined benefits, corporations and municipalities have seen the warning signs and are changing course to avoid getting burned. Public school employee unions and their allies in Lansing would be wise to do the same.

Thomas W. Washburne is director of labor policy for the Mackinac Center for Public Policy, a research and educational institute headquartered in Midland, Mich. Permission to reprint in whole or in part is hereby granted, provided that the author and the Center are properly cited.