Michigan Landowners To Be Heard at U.S. Supreme Court 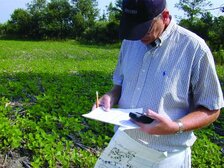 Russ Harding surveys the "wetlands" of a Bay County property owner. Harding's investigation was the basis for later coverage in The Detroit News and The Wall Street Journal.

On Feb. 21, the U.S. Supreme Court will hear oral arguments for two cases in which Michigan landowners are challenging the federal government’s ability to regulate wetlands on their properties. If the court follows the Constitution, the justices will rule in favor of the landowners. This result would not only restore some rationality to wetlands regulation, but uphold core principles of American federalism and democracy.

The first case is Rapanos v. United States, in which developer John Rapanos was found to have violated federal wetlands regulations when he moved fill material on three of his properties alleged to contain wetlands. The violations resulted in millions of dollars in fines. The second case, Carabell v. Army Corps of Engineers, began when the Army Corps of Engineers refused to permit several Macomb County landowners to fill 16 acres of a roughly 20-acre parcel in order to build condominiums.

Congress has effectively entered into land-use regulation, a domain traditionally left to state and local government. Worse, Congress delegated its authority to the Army Corps of Engineers, whose employees, whatever their expertise, never face the crucible of an election.

The theoretical basis of federal regulation in these cases is the 1972 Clean Water Act, which is supposedly grounded in Congress’ constitutional power to regulate interstate commerce. By hearing the two cases together, the court will have a chance to set boundaries on the act and even on what Congress can regulate under its interstate commerce powers.

In the Clean Water Act, Congress requires a permit whenever dirt or other fill is placed in "navigable waters," a term that Congress broadly defined as "waters of the United States" and empowered the Army Corps of Engineers to clarify. In a stunning example of mission creep, the corps eventually equated navigable waters with "waters such as interstate lakes, rivers, streams (including intermittent streams), mudflats, sandflats, wetlands, sloughs, prairie potholes, wet meadows, playa lakes, or natural ponds, the use, degradation or destruction of which could affect interstate or foreign commerce. …" The corps later added to this list any water that could be used as habitat by migratory birds, arguing that birds cross state lines and generate commerce in tourism and hunting.

In fairness, the Supreme Court has in fact upheld the corps’ permitting requirements for "wetlands adjacent to navigable bodies of water and their tributaries." But in 2001, in Solid Waste Agency of Northern Cook County v. Army Corps of Engineers, the Supreme Court rejected the migratory bird criterion as applied to ponds that had developed in abandoned sand and gravel pits.

Nevertheless, in both Carabell and Rapanos, this standard is not met. In Carabell, the wetlands are within a mile and a half of Lake St. Clair, but are not connected in any manner to a navigable waterway. In Rapanos, the nearest navigable water is 20 miles away. The Army Corps of Engineers can at best argue that water from the landowners’ properties could in very limited ways reach a navigable water, but this standard would be so broad as to be meaningless.

If the court holds the corps did not stretch the Clean Water Act’s language, the justices should then honor the Constitution’s commerce power limitation and hold that the act itself is unconstitutional. When regulating "interstate commerce" becomes a grant of federal control over private, isolated wetlands, the Constitution’s language becomes pointless.

Restraining the corps or Congress would provide a healthy check on federal power. The Founding Fathers distrusted strong, centralized government. They correctly believed that government operates best when it is responsive to the people, and that it is most responsive when it is as local as possible.

Congress has effectively entered into land-use regulation, a domain traditionally left to state and local government. Worse, Congress delegated its authority to the Army Corps of Engineers, whose employees, whatever their expertise, never face the crucible of an election. The public has no effective means to make them respond to legitimate concerns.

In a democracy, such policy decisions should surely be made — if at all — only by the people’s elected representatives, preferably local. If the Supreme Court’s justices fail to uphold this principle, they will have destroyed a major constitutional check on federal power and crippled the concept of a "government of the people."

Patrick J. Wright and Russ Harding are, respectively, senior legal analyst and senior environmental policy analyst for the Mackinac Center for Public Policy, a research and educational institute headquartered in Midland, Mich. Permission to reprint in whole or in part is hereby granted, provided that the author and the Center are properly cited.