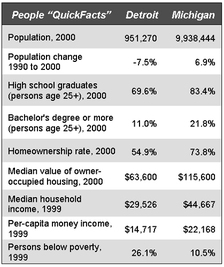 Detroiters are on the cusp of voting for mayor, and they may call for a changing of the guard. Regardless of the outcome, the winner must recognize that his victory brings with it a sobering challenge. Detroit’s decline has been reported since 1961, when Time magazine printed a full-page story on the subject. The downward spiral has only accelerated, with Detroit now ranked as the poorest big city in the United States, according to figures released in late August by the U.S. Census Bureau.

Real reform can’t be postponed. If Detroit’s decline persists and the city’s financial problems continue, the state may be forced to appoint an “emergency financial manager” to run the city under Public Act 72 — an ignominious end for the mayor and Detroit itself.

The next mayor must make fundamental changes to Detroit’s economic landscape. Appalling public services, sky-high tax burdens and suffocating business regulations have chased people, entrepreneurial talent and financial capital away from the Motor City for five decades. It would not be a stretch to say that several Detroit mayors were the best economic development officers Oakland County ever had.

The following are five recommendations for returning prosperity to the city of Detroit.

There is more the next mayor can do to help the city, of course. He should focus Detroit’s resources on fighting crime, for instance, and he should tell Detroit’s families that their children matter by welcoming philanthropist Bob Thompson’s proposed investment of $200 million in charter schools for Detroit.

But the five steps outlined above would change the city’s fundamental economic climate, rather than relying once again on questionable economic development projects like the Renaissance Center, which was sold in the 1990s at a fraction of its original value.

Real reform can’t be postponed. If Detroit’s decline persists and the city’s financial problems continue, the state may be forced to appoint an “emergency financial manager” to run the city under Public Act 72 — an ignominious end for the mayor and Detroit itself.

Michael D. LaFaive is director of fiscal policy for the Mackinac Center for Public Policy, a research and educational institute headquartered in Midland, Mich. Permission to reprint in whole or in part is hereby granted, provided that the author and the Center are properly cited.