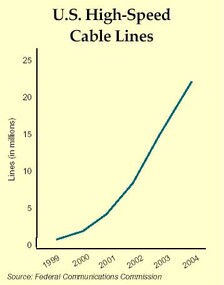 After years of litigation and bureaucratic wrangling, the U.S. Supreme Court has decided that cable companies can be exempted from onerous regulations that would force them to share their lines with rival Internet service providers. The ruling will improve the availability and affordability of high-speed Internet access. But the court resorted to questionable legal reasoning to rescue cable from an outdated regulatory regime that should be abolished.

By a 6-3 vote, the court upheld the decision of the Federal Communications Commission to classify cable broadband as an “information service” rather than as a “telecommunications service.” In so doing, the commission exempted cable companies from having to share their networks with Internet Service Providers who lack lines and other transmission infrastructure of their own.

The ruling’s outcome is all well and good. Yet the FCC’s distinction between “telecommunications services” and “information services” is, in fact, imprecise and arbitrary — a regulatory invention that has no place in today’s telecommunications market.

The FCC’s action was challenged by several Internet service providers, including Brand X and EarthLink, who apparently hoped to gain cable customers by demanding access to their competitors’ cable lines, rather than by investing in their own infrastructure or negotiating access with network owners. But subjecting cable companies to regulations that actually were devised in 1934 to increase the availability of basic telephone service would have stalled broadband deployment and triggered higher prices for Internet access.

Cable companies would be less likely to invest in new or upgraded networks if forced to allow rivals use of their lines and equipment. That has been precisely the outcome in the recent years of “forced-access” dictates imposed on telephone companies, which now have 30 percent fewer high-speed lines than cable companies.

The forced-access regulations were devised by Congress during the administration of President Franklin D. Roosevelt to promote universal telephone service. But that also helped to secure the market power of Ma Bell. In recent years, the advent of cellular, cable, satellite and Internet-based services has rendered such regulation obsolete.

Writing for the court majority, Justice Clarence Thomas characterized the FCC’s treatment of cable Internet service as “a first step in an effort to reshape the way the Commission regulates information-service providers.”

That’s all well and good. Yet the FCC’s distinction between “telecommunications services” and “information services” is, in fact, imprecise and arbitrary — a regulatory invention that has no place in today’s telecommunications market. Thus, while the court’s endorsement of limiting the regulation of cable Internet service is most welcome, its legal reasoning is shaky.

The court majority, in its support of the FCC, construed cable Internet service as a fusion of data processing and transmission functions. As such, cable companies would be exempt from forced-access requirements under the current rules.

But this reasoning raises a simple question: If cable Internet is an “information service,” why is the same type of service provided by telephone lines deemed to be a “telecommunications service” subject to the forced-access requirements? In fact, as noted in the dissent of Justice Antonin Scalia, cable Internet transmissions are virtually identical to those of regulated telecommunications services: “Since the delivery service provided by cable is downstream from the computer-processing facilities, there is no question that it merely serves as a conduit for the information services that have already been ‘assembled’ by the cable company in its capacity as ISP (Internet service provider). Thus, “After all is said and done, after all the regulatory cant has been translated, and the smoke of agency expertise blown away, it remains perfectly clear that someone who sells cable-modem service is ‘offering’ telecommunications.”

Indeed, the majority conceded that similar Internet access provided by telephone companies is regulated as a “telecommunications service,” but concluded, “We need not address that argument.”

All of which highlights the vagaries of current telecom law. Or as Justice Scalia put it, “It is indeed a wonderful new world that the Court creates, one full of promise for administrative-law professors in need of tenure articles and, of course, for litigators.”

Diane S. Katz is director of science, environment and technology for the Mackinac Center for Public Policy, a research and educational institute headquartered in Midland, Mich. Permission to reprint in whole or in part is hereby granted, provided that the author and the Center are properly cited.