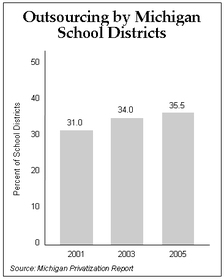 School districts face the same cost pressures as companies in the private sector in trying to deliver a quality product at the best price. One method used by firms in both the public and private sectors to achieve greater efficiency is the outsourcing of ancillary business operations. Michigan schools are contracting out more nonessential work than ever before, according to the Mackinac Center for Public Policy’s 3rd biennial school privatization survey.

This year the Mackinac Center successfully interviewed a representative from every one of Michigan’s 552 school districts to determine how many of them use outside vendors for three primary noninstructional services: food, janitorial and busing. The number of districts that contract out rose from 34.0 percent in 2003 to 35.5 percent currently. Today, 196 of the state’s school districts outsource at least one of these three functions.

According to Loock, the district went from paying a $100,000 subsidy to the food program to posting a profit of up to $25,000 after Chartwells took over.

By far the most popular area of school privatization is in food services: 156 Michigan school districts (over 28 percent) contract out with a private company for some type of food service delivery. While janitorial outsourcing occurs much less frequently than in the food services arena, there is a growing interest in it. Janitorial services are now outsourced in 8.7 percent of districts, up from 6.6 percent just two years ago.

The survey also asked questions about whether outside vendors had saved the district money, if the district was satisfied with its contracting experience, and what barriers (if any) existed to thwart privatization. Almost 80 percent of the districts reported savings through privatization, though some had difficulty quantifying precisely how much had been saved.

Only eight districts reported no savings, but even this number should be interpreted carefully. Over the years some districts have reported to us that they didn’t care about saving money as much as they were seeking to get out of a particular business — such as busing — so they could concentrate on their mission of educating kids.

The most significant barrier to privatization, according to 25 percent of those respondents willing to answer this question, was employee and union opposition. This opposition should not surprise even the most casual observer. Members pay hefty dues to unions that fight the type of competitive bidding that has saved many districts money while improving services. The Michigan Education Association has long opposed contracting out, even though it has in the past contracted for various support services at its own headquarters — and in some cases with non-union firms.

On July 11 Kent City schools became the most recent district in the state to privatize its food service program. Another addition to the Center survey is the Avondale school district in Auburn Hills. Timothy Loock, assistant superintendent for business services reports that contracting with Chartwells, a popular food service company, has meant that, “We are better off and the students are better off.” According to Loock, the district went from paying a $100,000 subsidy to the food program to posting a profit of up to $25,000 after Chartwells took over. He also added that Chartwells gave them a better quality food product and more selections.

Notably, food service for the entire Iron Mountain school district in Dickinson County is provided by the 144-student Dickinson Area Catholic School. The public school district is reportedly happy with their services, though not surprisingly they can’t get meat on Friday during Lent.

While the purpose of this survey was to specifically investigate contracts that districts held for basic noninstructional services, we found that many districts are using competitive contracting in other areas. For example, the Birmingham Public Schools maintains a comprehensive list of more than 60 services for which it utilizes outside contractors. The district is saving more than $50,000 annually by outsourcing 80 percent of its lawn mowing needs from April through November.

Done correctly, privatization can and does save money and often improves the quality of services for school districts willing to implement this cutting-edge management technique. Best of all, the savings realized can be invested in efforts that more directly impact the classroom experience of our children.

Michael LaFaive is director of fiscal policy, and Daniel Smith is a research assistant, both with the Mackinac Center for Public Policy, a research and educational institute headquartered in Midland, Mich. Permission to reprint in whole or in part is hereby granted, provided that the authors and the Center are properly cited.