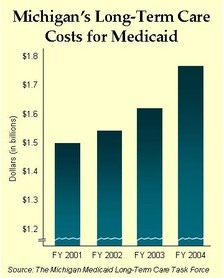 A gentleman’s C is the best grade one could give a June report issued by Gov. Jennifer Granholm’s Michigan Medicaid Long-Term Care Task Force. The report is long on good intentions, but short on workable ways to discourage wealthier seniors from shielding or spending their assets to get their nursing home bills paid by Medicaid, a government insurance program intended for the poor.

If this abuse is not ended, long-term care might well become the millstone that sinks Michigan’s Medicaid budget.

According to former state Sen. Joel Gougeon, who chaired the Michigan Senate Community Health Appropriations Subcommittee, asset divestiture by seniors is already costing the state $500 million to $700 million annually — about a third of Michigan’s $1.7 billion Medicaid tab for long-term care. Furthermore, the task force projects that Michigan’s elderly population will grow by 50 percent during the next 15 years. If these seniors all consume Medicaid dollars at the current rate, there will be little left to pay for the other medical needs of the poor — senior and nonsenior.

This isn’t the way it was supposed to work. In theory, Medicaid, funded by state and national government, pays for the nursing home care of seniors with $2,000 or less in their bank accounts.

But this figure does not include their home, car or business — a massive loophole that seniors, with the help of estate planners, have routinely exploited to escape the cost of nursing home care. In Michigan, the average semiprivate room costs around $57,000 annually, according to MetLife Mature Market Institute. A few years in a nursing home can easily wipe out a senior’s nest egg.

Given these stakes, many relatively well-off seniors routinely spend down or shield their assets to qualify for Medicaid. They buy expensive cars for their children, annuities with posthumous payoffs or beachfront properties for surviving relatives.

The task force’s main answer to this problem is to give seniors more long-term care options, such as home health care or foster care. The rationale is that fewer seniors will tap the state for nursing home care if the state offers these cheaper options.

This is wishful thinking. In a functioning market in which consumers have limited dollars, more options would reduce costs as consumers shop for cheaper alternatives. In contrast, Medicaid subsidies lure consumers to Medicaid services, which are cheap for them, but expensive for taxpayers. In fact, the only thing currently restraining seniors’ use of Medicaid is that the program mainly covers nursing home care, an option that many seniors do not find desirable. Giving seniors more attractive Medicaid options will only create more temptation for them to use the program.

The real solution would involve reversing Medicaid’s perverse incentives so that people are prompted to plan for their own future long-term care needs. To be fair, the task force presents some good ideas to that end.

Under this program, which Congress banned after four states launched it in the early 1990s, seniors who buy private long-term care insurance for, say, $100,000 could keep assets of that amount and still qualify for Medicaid assistance should they need additional care after their policy runs out. In other words, they wouldn’t have to spend down their assets to $2,000, but only to $102,000, for Medicaid coverage.

In the four states with this program, around 180,000 of the insurance policies have been sold — a purchase rate far higher than in other states. Of these policyholders, only 86 have had to resort to Medicaid. Moreover, long-term care insurance policies typically cover a range of options, from home help to hospice care, providing more choices for seniors without further state involvement.

It is therefore too bad that the task force buried these recommendations at the end of its report. It is even worse that the report’s “model legislation” makes no mention of them to state lawmakers.

Giving individuals the right incentives to do the right thing is at the heart of good public policy. Sadly, the governor’s task force offers snake oil in place of innovative therapies to cure Medicaid’s critical disease.

S.D. Melzer is an adjunct scholar with the Mackinac Center for Public Policy, a research and educational institute headquartered in Midland, Mich. Permission to reprint in whole or in part is hereby granted, provided that the author and the Center are properly cited.