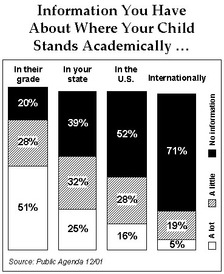 U.S. public school parents say they don’t know much about how their own kids are doing compared to the rest of the nation and the world.

When we’re asked about the overall quality of our nation’s or state’s public schools, Americans are fairly pessimistic. But when asked about the schools in their own neighborhoods, people are usually more upbeat.

This pattern was repeated yet again in a California poll released on April 28 by the Public Policy Institute. Four of every five Californians say there’s a quality problem with the state’s schools — most think it’s a “big” problem. But when pollsters asked about people’s neighborhood schools, over half rated them an “A” or a “B,” and only 13 percent gave them a “D” or an “F.”

Asian students consistently outperformed those in the United States, while their parents downplayed their accomplishments. American parents, unaware of their children’s poor showings, tended to think their children were doing very well.

What gives? One popular explanation is that we don’t really have any idea how our nation’s or state’s public schools rank overall, but we do know about the performance of our own kids and our own schools. The more we know, the more satisfied we are.

This explanation has such an air of plausibility that it has convinced a great many people. If you’re one of them, and if you’d like to stay convinced, stop reading now.

In my book “Market Education: The Unknown History,” I proposed an alternative explanation for this “class is keener” phenomenon: that Americans know more about the nation’s overall performance than about the performance of their own children or their own neighborhood schools. We read the papers; we see the international rankings; and we eventually deduce that American public education is in trouble. But given the absence of any international rankings for our own children, and presented with inflated classroom grades, we mistakenly conclude that our own kids are doing well, and that all the bad American schools are in other people’s neighborhoods.

I based that theory partly on an international study of student achievement and parent opinion conducted by Harold Stevenson and James Stigler. Stevenson and Stigler tested students in various Asian and American cities and then asked their parents how well they thought their children were doing. Asian students consistently outperformed those in the United States, while their parents downplayed their accomplishments. American parents, unaware of their children’s poor showings, tended to think their children were doing very well.

But are these results really representative? In other words, do American students as a whole really perform badly, and are their parents really so ill-informed about their own kids’ academic shortcomings?

The short answer to the first part of that question is yes. As I detailed in March on the Mackinac Center for Public Policy Web site, the recently published results of the 2003 Trends in International Mathematics and Science Study and of the 2003 Program on International Student Achievement are consistent with a longstanding pattern: American kids start off alright in the earliest grades, but fall further and further behind students in other countries the longer they stay in school.

Indeed, as other international exams have shown, Americans are near the bottom of the heap among industrialized nations by the end of high school. This is true despite our higher-than-average dropout rate, which means fewer of our weak students are tested. As I wrote in March, “It’s no use claiming that U.S. 12th-graders did abysmally because some nations tested a smaller, more elite subset of the age cohort. The more selective nations generally did worse than the less selective ones.” Moreover, our best students are further behind the world’s best than our average students are behind the world’s average.

These findings undermine the claim that people are better informed about the performance of their own schools and children than they are about the nation’s overall educational performance. Americans are probably kinder to their neighborhood schools because they know less — not more — about them than about the nation’s schools as a whole.

The moral of this story is that no news is not necessarily good news. What you don’t know about your schools’ and children’s performances can hurt you.

Andrew J. Coulson is senior fellow in education policy for the Mackinac Center for Public Policy, a research and educational institute headquartered in Midland, Mich. Permission to reprint in whole or in part is hereby granted, provided that the author and the Center are properly cited.