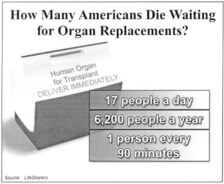 Americans are known around the world as a people who do much for themselves and don’t wait for some agency of government to do things for them. People solving problems without the intrusion of politics is a feature of American life we must seek to encourage, because it usually solves problems best, and preserves our liberties and pocketbooks at the same time. A great and recent example is a new private group called LifeSharers.

The problem LifeSharers seeks to ameliorate is the nationwide shortage of human body organs. Federal law and many people’s sensibilities prevent a genuine market in human organs, but the effect of those inhibitions is to claim about 17 Americans every day. That’s how many die waiting for a heart, kidney, lung or other body organ — a daily toll that adds up to over 6,200 a year. Here’s another way to look at it: People on the transplant waiting list are dying at the rate of one every 90 minutes.

As LifeSharers grows, so does the incentive to become a registered donor: preferred access to an ever-larger pool of donated organs.

Today’s donation system relies on little more than altruism: Leave your organs for others because it’s a good thing to do. That may be an admirable motive, but it has nonetheless yielded an intractable shortage. The sad fact is that only about 30 percent of Americans who die with harvestable organs consented to donating. Making matters worse, the families of those who did sign donor cards often veto the wishes of the deceased by refusing consent.

The altruistic approach has left us in a crisis because it fights human nature. We’ve been asking people to think about something that is very unpleasant, and to commit to doing something that is very scary, without giving them anything in return except a good feeling. Clearly, the number of people generous enough to make that trade isn’t nearly enough to supply all the organs we need.

Enter David J. Undis, a 49-year-old retired insurance executive from Nashville, Tenn. A former economics student, Undis reasoned that some old-fashioned incentive could be the cure for the organ crisis. The law prohibits monetary payment for organs, so he came up with another powerful motivator: putting organ donors at the front of the transplant waiting list. By doing so, he figured we could give everybody a strong incentive to sign a donor card because anybody who doesn’t sign one will have to go to the back of the waiting list.

This was the idea behind LifeSharers, which Undis launched in May of 2002. LifeSharers members agree to donate their organs when they die, but they give fellow members “first dibs” on them. Non-members can have a member’s organs if no member who is a suitable match for them wants them. Anyone can join at www.lifesharers.org. Membership is free and open to everyone, without discrimination.

Directing your donation first to other members of the network creates an incentive for others to join. To date, members of the infant organization number less than 2,000. To understand the enormous potential, Undis says to imagine what it will be like when LifeSharers has 1,000,000 members: “You’ll be crazy not to join if you think you’ll ever need an organ. By not joining, you’ll be reducing your access to 1,000,000 hearts, 1,000,000 livers, 2,000,000 kidneys, 2,000,000 lungs, 2,000,000 corneas, and more. Let’s face it — if only organ donors could receive organs, just about everybody would be a donor.”

As LifeSharers grows, so does the incentive to become a registered donor: preferred access to an ever-larger pool of donated organs. That will also make the system fairer, because your chances of receiving an organ will be greater if you’ve agreed to be a donor.

But LifeSharers is not without its critics. They say it’s not fair to give special treatment to those who have agreed to donate their organs when they die. However, people who don’t donate their organs are the ones who are getting special treatment. They receive about 70 percent of all donated organs, while registered organ donors receive only about 30 percent. LifeSharers doesn’t create an inequity, it corrects one.

The critics of LifeSharers seem to miss the most important point: LifeSharers is increasing the number of organ donors. More donors means fewer deaths.

Join LifeSharers and you can help solve a pressing problem that costs thousands of lives every year. The next life you save may be your own.

(Lawrence W. Reed is president of the Mackinac Center for Public Policy, a research and educational institute headquartered in Midland, Mich., and a member of the advisory board of LifeSharers. More information is available at www.mackinac.org. Permission to reprint in whole or in part is hereby granted, provided the author and his affiliation are cited.)