French Fried by the Welfare State 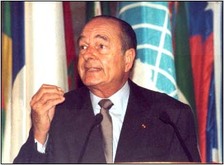 It is doubtful whether French President Jacques Chirac, who ordered an official inquiry into why so many people died from the summer heat wave in France, will cite an over-reliance on government as a contributing factor.

“Heat Wave Toll Nearly 15,000” blared a recent headline. Must be some far-off, little-known, God-forgotten corner of the planet nobody ever heard of, I figured. Nope. It was France.

Consider the enormity of what happened in August. When the sun came out and the temperatures rose to something below what El Paso endures for four months of every year, a staggering 14,802 mostly elderly people in France died. The proportional equivalent in the United States, where a hundred deaths from heat would provoke a congressional inquiry, would be 72,000. That’s a population the size of the city of Kalamazoo, Mich.

The French can advance civil society only when they get serious about replacing government programs with private initiative, when discussion gets beyond such infantile reasoning as, “If you want to cut government subsidies, you must be in favor of starving the elderly.”

How is it possible for a heat wave to wipe out nearly 15,000 people in a modern nation — one that takes great pride in having fashioned one of the world’s most extensive welfare “safety nets”? Perhaps the safety net is really a smothering blanket.

France has a costly network of publicly funded benefits that begin flowing from the bosom of the national nanny at birth. When a woman has her first child, she gets a check. Each successive child generates an increase in her monthly allowance, courtesy of the taxpayers.

When the child retires six decades and a plethora of other handouts later, he or she gets a generous state pension. The message each French citizen gets for a lifetime is that government is there to take care of him. And what about the moral responsibility each of us has to care for one another? That’s the assignment of some department somewhere in Paris.

So, when thousands of elderly were roasting in August, their friends and relatives took a vacation. Why should they assume a responsibility that the state has assumed for them? Besides, after the French government extracts one of the highest per-capita tax bills in Europe, citizens don’t have much money left to take care of their elderly anyway.

Edward Hudgins of The Objectivist Center argues that the French welfare state “is based on the premise that adults should be treated like children who can’t keep jobs or earn enough money to support their families, pay for their own health care, or save for their retirement without state help. Worse, France’s government and prevailing morality teach that individuals have little moral responsibility to take charge of their own lives ... The welfare state that purports to love humanity creates moral midgets who feel absolved of the responsibility to care for their loved ones.”

Americans have erected a welfare state as well, but not one so far “advanced” that our penchant for rugged individualism, personal responsibility, and strong families has vanished. Many Europeans see us as heartless and uncaring because we don’t expect Uncle Sam to coddle us from cradle to grave. But because we still largely take care of ourselves and those around us, we don’t drop dead by the tens of thousands when the temperature goes up.

How can France revive the attitudes and institutions that form the foundation of a strong civil society — a society composed of children who eventually do grow up to be independent, self-respecting adults?

Certainly, the French can never do so by blindly embracing government programs that crowd out private initiatives or by impugning the motives of those who raise legitimate questions about those government programs. They cannot restore civil society if they have no confidence in themselves and believe that government has a monopoly on compassion. They’ll never get there if they tax the daylights out of people’s earnings and then, like children who never learned their arithmetic, complain that people can’t afford to meet certain needs.

The French can advance civil society only when they get serious about replacing government programs with private initiative, when discussion gets beyond such infantile reasoning as, “If you want to cut government subsidies, you must be in favor of starving the elderly.” They’ll make progress when the “government is the answer” cure is recognized for what it is — false charity, a cop-out, and a simplistic non-answer that doesn’t get the job done well, even though it makes its advocates smug with self-righteous satisfaction.

What happened in France in last summer’s heat wave should be laid at least partly at the doorstep of the French welfare state and its social consequences. Those with an endless laundry list of things they want government to do for us need to think long and hard about that.

(Lawrence W. Reed is president of the Mackinac Center for Public Policy, a research and educational institute headquartered in Midland, Mich. More information is available at www.mackinac.org. Permission to reprint in whole or in part is hereby granted, provided the author and his affiliations are cited.)