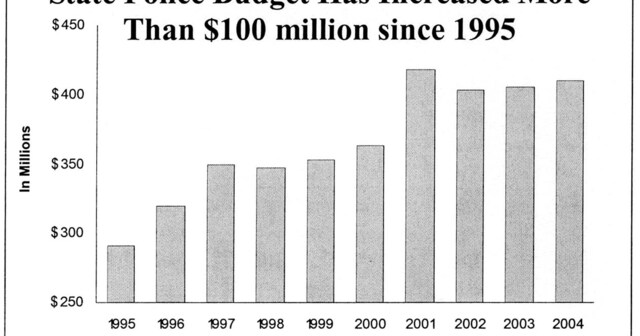 The next time you see a Michigan State Police trooper ticketing speeders, ask yourself this question: Why is a routine traffic safety enforcement action being performed by a state trooper, when the same job could be done just as well for far less money by a county sheriff’s deputy?

This is the sort of question the Granholm administration should be asking as it looks for ways to trim Michigan’s looming $1.7 billion budget deficit. As with many other budget items, the answer to this particular question boils down to “that’s how we’ve always done it.”

Yet, Michigan could save around $65 million each year by handing over highway traffic safety enforcement to county sheriffs — without reducing by a single officer the amount of road patrol activity, or its quality.

It costs Michigan taxpayers some $90,000 to keep a state trooper on the payroll for a year. This is not the “take-home” pay of officers, but the total compensation cost incurred by their employer, including benefits and the state’s share of mandated taxes and fees. By contrast, county sheriff deputies cost taxpayers less than $70,000 a year in most places — often much less.

To be sure, the Michigan State Police provide many law enforcement services that local and county agencies cannot. Among these are forensic science and lab services, criminal databases, special operations, including canine and underwater units, bomb squads, and more. The State Police also perform multi-jurisdictional and large-scale criminal investigations. Because it serves the entire state and so enjoys economies of scale, it is logical for the department to continue providing these services as a backup to local police.

However, it is not logical to divert expensive State Police resources to functions local agencies are eminently capable of performing for much less money, such as routine traffic safety enforcement.

Sheriff deputies and municipal police in Michigan are fully competent to take over this function. In fact, one of the functions performed by the State Police is to set standards and certify law enforcement training programs for all local peace officers. Some $11 million is spent each year to do so, and to provide in-service training for local police. There’s no reason why this training could not include traffic safety enforcement.

So how do we begin saving taxpayers $65 million a year? The “uniformed services” line item in the state budget accounts for 40 percent of the annual $410 million State Police budget. The lion’s share of this money pays for road patrols. If that function were transferred to the counties, other overhead expenses could be cut and the entire department downsized. In a March 2003 Mackinac Center analysis, the estimated total reduction could come to around $195 million.

The average cost statewide to employ a county sheriff deputy is approximately 77 percent (or less) of the cost of employing a state trooper. Therefore, the state could give grants to county sheriff departments equivalent to 77 percent of the amount it currently spends for road patrols, or $128 million. This would allow sheriff’s departments to hire more deputies, and also to boost their overhead to support expanded operations. The grants should have strings attached: Sheriffs should be required to provide the same amount of major highway road patrols as are currently provided by the State Police.

To maintain State Police trooper levels and other functions despite revenue shortfalls, Gov. Granholm is proposing a $12 increase in drivers license renewal fees, and new fees on the property insurance bills of homeowners. These "revenue enhancements" can provide the state more cash, but they may not be necessary if the state just spent the money it has more wisely. Allowing local law enforcement departments to perform routine traffic safety patrols on major highways is a better solution for Michigan motorists and taxpayers.

(Jack McHugh is legislative analyst for the Mackinac Center for Public Policy, a research and educational institute headquartered in Midland, Michigan. He is also project manager for MichiganVotes.org, a web-driven legislative database operated as a public service by the Mackinac Center. More information is available at www.mackinac.org. Permission to reprint in whole or in part is hereby granted, provided the author and his affiliation are cited.)