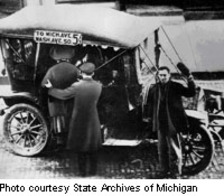 The jitney industry took off in 1914 but soon drew the ire of streetcar operators, who successfully lobbied the government to regulate their lower-priced competitors out of business by the mid-1920s.

So reads the official ban on one of the oldest illegal businesses that still operates openly in Detroit. The rather emphatic language says, in effect, "We don' t want any part of this!" And yet, on public bulletin boards at grocery, drug, and department stores all over the city, one can find notices that announce, "For jitney service, call this number."

Laws against the victimless "crime" of helping people get around town without a license represent a cynical use of the police power of government by special interests.

Just what is this "jitney" thing that the city of Detroit officially declares it wants to squash? Jitneys are popular businesses in which retired autoworkers, church deacons, widowers and otherwise idle but able citizens charge a small fee to give poor people a ride from where they shop to where they live, bags and all.

The "crime" is that jitneys do their good work without a taxi license from the city government—the same city government that refused to authorize a single additional taxicab for nearly 50 years.

Getting a license to do just about anything in Detroit can mean endless delays, lengthy waiting lists, thousands of dollars, mounds of paperwork, and senseless rigmarole.

Fortunately, the cops in Detroit look the other way and the jitney business is thriving. According to Ruby L. Bailey, business writer for the Detroit Free Press, no one has filed a complaint against a jitney in at least 26 years and no jitney driver in recent memory has had to face the stipulated fine of $500 and 90 days in jail. Nearly a third of Detroit's households do not have cars, and the city has one of the lowest per-capita incomes of any urban area in the nation. Thus, it is likely that thousands of technically illegal jitney rides occur there every week. The drivers charge much less than the taxicabs (which many potential customers cannot afford), often carry their clients' bags from the store to the vehicle, are easily accessible in any neighborhood, and are the primary means of transportation for many of Detroit's poorest citizens.

The spontaneous order that Detroit's jitney system has produced is elaborate as well as efficient. A report from the Washington, D.C.-based Institute for Justice revealed that drivers typically have their own territories. Sometimes they attach themselves to a particular strip mall or store and will often transport shoppers as well as store employees to and from work. Customers have come to know who the best jitney drivers are, and those drivers strive to keep up their good reputations for the sake of their businesses.

Jitneys are not unique to Detroit. They operate in most major American cities in direct but illegal competition with both the government-sanctioned taxi monopolies and government-run bus systems. In some places, they face a lot more harassment from the authorities than they do in Detroit. In New York City, the police routinely bust jitney drivers but thousands of them still operate with the approval of tens of thousands of customers.

Who worked to make jitneys illegal? At first, it was the electric streetcar industry. Electric railways are not around much any more, but taxicab and city bus monopolies have taken their place in the war against jitneys.

Laws against jitneys and the victimless "crime" of helping people get around town without a license, whether fully enforced or not, represent a cynical use of the police power of government by special interests. Politicians who support these laws should not express their sympathy for the poor at the same time they make war on poor entrepreneurs. The persistence of jitneys on Detroit streets is actually an inspiration, a testimony to the power of the profit motive that encourages people to help others even when it is illegal to do so.

The city of Detroit and illegal jitneys have one thing in common: They both take people for a ride. But when a jitney does it, citizens actually get a valuable service as part of the deal.

(Lawrence W. Reed is president of the Mackinac Center for Public Policy, a research and educational institute headquartered in Midland, Michigan.

More information on regulation is available at www.mackinac.org. Permission to reprint in whole or in part is hereby granted, provided the author and his affiliation are cited.)
ISSN: 1093-2240
SKU: V1999-38