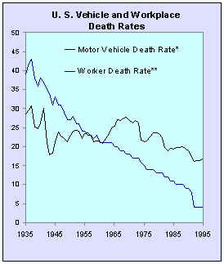 On a recent airline flight, I was seated next to a middle-aged woman who was petrified of flight. From the moment we took off in Phoenix until we reached the gate at Ronald Reagan National Airport across the Potomac River from Washington, D. C., she was in a state of terror.

This poor nervous Nellie was visibly trembling, and beads of sweat were dripping down her brow. She had popped a Valium before takeoff, but it did not seem to quell her agitation. "I can see you don’t like flying," I noted sympathetically. "Hate it," she responded. "These things fall out of the sky all of the time, you know."

Well, not lately they don’t. In case you missed it, in 1998 there were 14 million commercial airline flights in the United States carrying 615 million passengers. How many deaths? A big fat zero. You had a greater chance of dying by electrocuting yourself in the bathtub, being crushed to death by your car’s government-mandated airbag, or just crossing the street in Manhattan than you did by flying in a plane.

America is a nation of worrywarts. We all laughed at the neurotic character played by Jack Nicholson in the movie As Good as It Gets (remember his fear of stepping on cracks in the sidewalk?), but let’s face it, there is a little neuroticism in us all. We worry about everything—from global warming to the amount of fat in our breakfast cereal to the radiation emanating from our computer.

A recent public-opinion poll featured in USA Today confirms that Americans are concerned about the strangest things. More than half say successful cloning is one of the things they most dread about the twenty-first century. Amazingly, 55 percent cited "technology" as a worry, despite the fact that technology such as food irradiation could have prevented Michigan’s recent bacteria-tainted meat tragedy that was linked to 11 deaths.

One of our greatest risks in this modern age could be that we are needlessly worrying ourselves to death. The world is much safer today than at any time in history, and market-driven technology is a big reason for that. Many things we fret about are not dangerous at all. Consider the following:

What else do we worry about? War? Floods and tornadoes? AIDS? Nuclear accidents? Drunken drivers? Acts of terrorism? Sudden infant death syndrome? Contaminated air and water? Believe it or not, the death rate from every single one of these menaces is down—and in most cases way down. Another example: Polio was a deadly and frequent killer in the 1930s, but the Centers for Disease Control and Prevention cite no reported cases of polio in the United States in 1997.

Now, of course, we worry about "the big C": cancer. The good news is that we are winning the race for the cure.

Thirty years ago, to get cancer was to receive a death certificate. Now, thanks to technology, the survival rate from cancer is nearly 50 percent. The reason so many older Americans die of cancer nowadays is because we have been so successful at preventing their earlier deaths from other things.

If after reading this, you are still nervous about the sky falling and the world coming to an end, my advice is this: Do not call your Congressman and ask him to make the world safer; call your airline instead and book a flight. These days, on an airplane is probably the safest place you can be.