Grover Cleveland: Could He Be Elected Today? 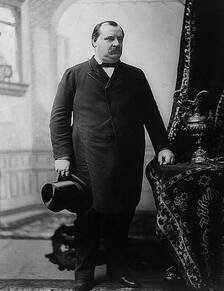 In observance of this year's Presidents' Day, we reprise this essay from 1996. Though Presidents' Day officially honors George Washington and Abraham Lincoln, it also offers a timely opportunity to remember other presidents who served as models worth honoring and remembering, especially as this year is filled with presidential politics.

When historians are asked to grade the men who have served as America's presidents, they usually give high marks to the "activist" ones – those who expanded the frontiers of the federal government, pushed taxes and spending higher, and left a mark on the country by foisting vast new bureaucracies on future generations.

That's why historians rarely mention Grover Cleveland except to note that he remains the only man ever to serve two nonconsecutive terms (he was elected first in 1884, then again in 1892). A Democrat, Cleveland was an "activist" in a sense that makes him unpopular with most of today's historians. He worked tirelessly to limit government and expand the scope of individual liberty. He was also known in his day as one of the most honest men in American public life, a trait that catapulted him from mayor of Buffalo, New York, to president of the United States in the space of four years, with a two-year term as governor of New York along the way. As Americans prepare for another presidential election, they would do well to recount the reasons why their ancestors chose Grover Cleveland twice before.

Cleveland said what he meant and meant what he said. He did not lust for political office and never felt he had to cut corners, equivocate, or flip-flop on the issues in order to get elected. A man who knew where he stood, he was so forthright and plain-spoken that he makes Harry Truman seem like an indecisive waffler by comparison. Biographer Allan Nevins summed him up this way: "His honesty was of the undeviating type which never compromised an inch; his courage was immense, rugged, unconquerable; his independence was elemental and self-assertive. . . . Under storms that would have bent any man of lesser strength he ploughed straight forward, never flinching, always following the path that his conscience approved to the end."

Frequent warnings of the redistributive nature of government were a trademark of Cleveland, the son of a poor Protestant minister. He regarded as a "serious danger" the notion that government should dispense favors and advantages to individuals or their businesses. In vetoing a bill in 1887 that would have appropriated a mere $10,000 to aid drought-stricken farmers in Texas, Cleveland stated that "though the people support the Government, the Government should not support the people." For relief of citizens in misfortune, he felt it was important to rely upon "the friendliness and charity of our countrymen."

That veto was one of many. In fact, Cleveland in his first term vetoed twice as many bills as all previous 21 presidents combined. Most of those bills were little more than cynical attempts by somebody to get something from somebody else by the force of the government's gun. Disdainful of pork barrel politics, he felt that those who would use and benefit from government projects should pay for them. Compare that attitude with the pandering to special interests that seems so common today!

Cleveland broke with the old practice of bloating the federal bureaucracy with political cronies. He maintained the highest standards in choosing the people who served around him, making appointments only when necessary and then, only of people whose character and qualifications were beyond reproach. The White House during his tenure was scandal-free, a model of propriety for the rest of the country. He had no enemies list.

Grover Cleveland ran for president as the Democratic Party's nominee three times. He won twice and lost once. He carried Michigan in none of those elections. In 1996, the one hundredth anniversary of his last year in office, it is doubtful that a candidate of his views could win Michigan or any other state. The question is, does that reflect poorly on Cleveland or on the voters of today?