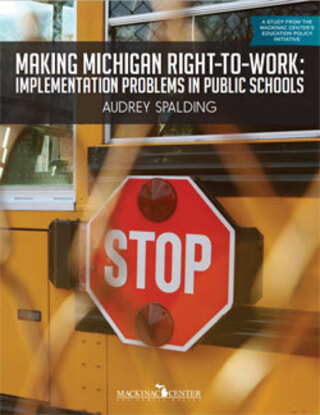 This paper examines how public school districts responded to Michigan's 2012 “right-to-work” law. It describes the key findings from reviews of more than 500 teacher collective bargaining agreements. It also raises several questions about the legality of some union contracts with regard to this new law.

Approximately 75 percent of districts with contracts subject to the right-to-work law removed language that would require employees to financially support a union as a condition of employment. Both legal and policy questions are raised by the remaining 25 percent of districts, which kept mandatory dues language in one way or another, despite having a contract that took effect or was modified after the law's effective date.

The study describes five issues with these contracts. Twenty-three contracts made no apparent changes and kept mandatory dues language. Eight districts created a separate agreement to require mandatory dues payment. Fifteen contracts were ratified before they would be subject to the right-to-work law, but then didn’t take effect until much later. Five contracts made only the mandatory dues language immediately effective, while delaying the rest of the contract. Finally, at least six districts have modified parts of their contract without making the rest of it compliant with the right-to-work law.