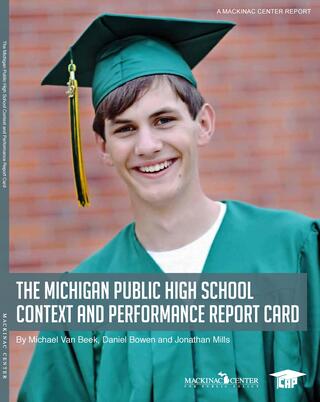 Assessing a high school’s effectiveness is not straightforward. Comparing a school’s standardized test scores to those of other schools is one approach to measuring effectiveness, but a major objection to this method is that students’ test scores tend to be related to students’ “socioeconomic” status — family household income, for example, or parents’ educational background. These factors, however, are outside a school’s control.

The Michigan Public High School Context and Performance Report Card is an attempt to provide a better “apples-to-apples” comparison of public high schools by adjusting their students’ average standardized test scores to account for disparities in the socioeconomic status of their student populations.

Socioeconomic status in the Context and Performance (“CAP”) Report Card is measured by the percentage of a school’s students who qualify for a free or reduced-price lunch under the federal government’s National School Lunch Program. The standardized tests used in the report card are from the Michigan Merit Examination — including the ACT® test — taken by the schools’ 11thgraders from 2008 through 2011.

We used regression analysis to measure the relationship between student test results and subsidized-lunch counts in Michigan’s general education public high schools (schools focused on special education or alternative education were excluded from our analysis). We then determined whether each school’s student population performed better or worse than projected based on the school’s subsidized-lunch counts.

It is important to remember that these CAP Scores and grades are relative. Each high school is assessed based on its performance compared to other high schools in the state; CAP Scores do not indicate how well these high schools compare to those in other states or countries. Moreover, CAP Scores do not adjust for every factor that may lie outside a school’s control. Nevertheless, by accounting for a major factor that is substantially related to student achievement and outside a school’s control, the CAP Report Card improves the quality of information publicly available to Michigan parents, taxpayers, school officials and policymakers.