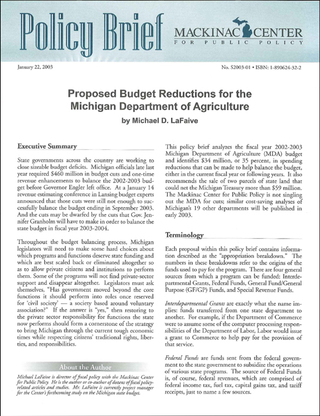 Proposed Budget Reductions for the Michigan Department of Agriculture

Gov. Granholm and the Michigan Legislature can save $34 million in the state agriculture budget, and sell state land for another $59 million.

This Policy Brief takes a more in depth look at the Michigan Department of Agriculture, which is part of a larger study on the State Budget. See Recommendations to Strengthen Civil Society and Balance Michigan’s State Budget — 2nd Edition

State governments across the country are working to close sizeable budget deficits. Michigan officials late last year required $460 million in budget cuts and one-time revenue enhancements to balance the 2002-2003 budget before Governor Engler left office. At a January 14 revenue estimating conference in Lansing budget experts announced that those cuts were still not enough to successfully balance the budget ending in September 2003. And the cuts may be dwarfed by the cuts that Gov. Jennifer Granholm will have to make in order to balance the state budget in fiscal year 2003-2004.

Throughout the budget balancing process, Michigan legislators will need to make some hard choices about which programs and functions deserve state funding and which are best scaled back or eliminated altogether so as to allow private citizens and institutions to perform them. Some of the programs will not find private-sector support and disappear altogether. Legislators must ask themselves, "Has government moved beyond the core functions it should perform into roles once reserved for ‘civil society’ — a society based around voluntary association?" If the answer is "yes," then restoring to the private sector responsibility for functions the state now performs should form a cornerstone of the strategy to bring Michigan through the current tough economic times while respecting citizens’ traditional rights, liberties, and responsibilities.

This policy brief analyzes the fiscal year 2002-2003 Michigan Department of Agriculture (MDA) budget and identifies $34 million, or 35 percent, in spending reductions that can be made to help balance the budget, either in the current fiscal year or following years. It also recommends the sale of two parcels of state land that could net the Michigan Treasury more than $59 million. The Mackinac Center for Public Policy is not singling out the MDA for cuts; similar cost-saving analyses of Michigan’s 19 other departments will be published in early 2003.