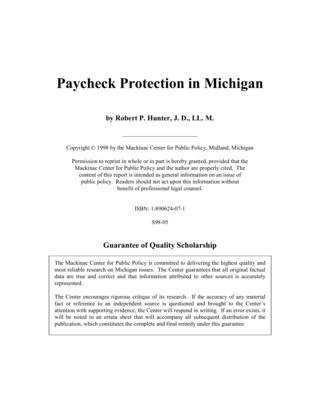 The U. S. Supreme Court's 1988 landmark decision Communication Workers v. Beck established the rights of employees working under union contracts to pay only those union dues or fees necessary to cover the costs of a union's employee representation duties. However, the majority of Michigan's nearly one million union workers are unaware of their rights under the Beck decision for the simple reason that their unions neglect to inform them. This report shows how "paycheck protection" legislation would help safeguard worker Beck rights by requiring unions to obtain up-front, written approval from individual workers each year before they could spend the dues money on political or other non-workplace-related activities. The report recommends that Michigan policy makers adopt a paycheck protection proposal to help union workers enjoy their freedoms of speech and association as they refrain from involuntarily contributing money to union causes with which they disagree.