The Future of Oil and Gas Energy in Michigan and the U.S. 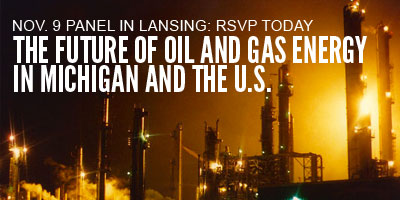 Click below to watch a video of the Nov. 9 Mackinac Center Issues & Ideas Forum in Lansing. The event was originally simulcast live on the Web.

The forum featured the following experts:

Hal Fitch was appointed Director of the Office of Geological Survey in 1996, where he oversees the regulation of oil, gas, mining and mineral well operations. He received a bachelor’s of science in geology from Michigan Tech in 1972 and began his career with the U.S. Geological Survey in Denver.

Karen Alderman Harbert is president and CEO of the U.S. Chamber of Commerce’s Institute for 21st Century Energy. She received a bachelor’s degree in international policy studies from Rice University and is the former assistant secretary for policy and international affairs at the U.S. Department of Energy.

The Purpose of the Issues & Ideas Forum

The nature of the legislative process is such that public policy debates are often framed by specific constituencies and political pragmatism rather than by sound principles. By offering a forum for wide-ranging discussion, the Mackinac Center for Public Policy hopes to broaden the debate to include theoretical and philosophical ideals — and how to achieve them. The best interests of Michigan residents can be served only when legislation incorporates our best understanding of