Our examination of the NEA/MEA is complicated by the fact that the nation's largest public school employee union represents very few private-sector employees. While some smaller NEA locals in Michigan do file under the LMRDA, none of those are large enough to be required to file form LM-2. In fact, only three local affiliates of the NEA nationwide filed LM-2 forms during 2006, of which two represent teachers employed by schools run on military bases under the supervision of the Department of Defense for the purpose of educating the children of military personnel. The location and circumstances of these locals is peculiar enough that we considered their use inappropriate.[30] The third NEA local to file an LM-2 form is the United Faculty of Florida, located in Tallahassee. The UFF represents instructors and professionals at public colleges throughout Florida, as well as at two independent colleges — which triggers their obligation to file under LMRDA.

Using UFF as a stand-in for an NEA-MEA local in Michigan is not without problems: the UFF bargains with state colleges rather than local school boards, and Florida — aside from not being Michigan — is a right-to-work state. However the Michigan Education Association and its affiliates are among the most powerful unions in Michigan; a review of union spending in Michigan without a look at NEA/MEA would be incomplete. Given the limited options, using UFF as a stand-in seems to be the best route because its operations, while distinct from those of most MEA/NEA locals, are at least in line with that of a normal government employee union; it bargains with state entities rather than the Department of Defense. The reader should bear these distinctions in mind, but should also consider that the structure of the NEA/MEA appears to put the majority of spending at the state level rather than the local due to the unique role of Uniserv staff, who are hired by state affiliates and have a great deal of influence over representation at the local level. Local spending is significant, but unlike other unions the bulk of spending in NEA/MEA is not done at the local level.[*]

With that in mind, our review of the UFF's LM-2 report indicates that representation makes up 59.4 percent of UFF spending. Most of the remaining disbursements fall into the category of administration. UFF's operations cover members and chapters at college campuses across Florida, in contrast to most MEA-NEA locals that are dedicated to a single school district. It is possible that internal union decision-making is complicated by geography, which contributes to higher-than-usual administrative costs. UFF's total spending is over $823,621, for 3,990 members, which comes out to $206.42 per member, or 21.5 percent of the total of $958.30 that NEA/MEA appears to have spent per-member in 2006.[31]

The MEA is remarkably large for an intermediate union body. The MEA's LM-2 Form covers more than 200 pages; no other intermediate organization that we reviewed filed an LM-2 of even one-third that length. In direct contrast to Teamsters Joint Council 43, the MEA appears to be responsible for the majority of NEA/MEA spending in Michigan. Our review shows that MEA spent $632.44 per member, 66.0 percent of total per-member spending.

At first glance, the MEA comes off as an extremely inefficient representative organization, with only 22 percent of spending going into representation and 60 percent allocated to overhead. A closer look results in a slightly less severe appraisal, although MEA members still have considerable grounds for concern about their union's priorities.[32]

The National Education Association, based in Washington D.C., had more than 2.7 million members and total expenditures of over $330 million in 2006, which works out to $119.43 in per-member expenditures, 12.5 percent of the total per member expenditures for the UFF, MEA and NEA combined.

At this level, the NEA is largely disconnected from what most union members would probably consider the central purpose of unions; employee representation expenditures made up only 19.4 percent of NEA national headquarters spending. Spending on representation was exceed by spending on contributions, gifts and grants (23.0 percent) general overhead (23.1 percent) and administrative costs (24.6 percent).[34]

After breaking down itemized representation expenses, we find that transfers to locals and personnel costs make up the bulk of NEA headquarters representation spending. (44.0 and 38.4 percent of spending, respectively.) To a large extent the NEA's "representation" function consists of distributing funds to affiliates. As is described above, this creates a possible double-counting problem which may lead to overstating NEA's actual involvement in representation.

On the other hand, NEA headquarters shifted relatively little of its overhead costs to representation, as is the case with its Michigan affiliate; only 2.0 percent of NEA's itemized representation disbursements were for items that could be considered overhead. We also found a number of questionable itemized expenditures attributed to representation:

$30,000 to the Campaign for America's Future, which describes itself as "the strategy center for the progressive movement."35

$50,000 to the National Coalition on Health Care, a "representative alliance working to improve America's health care." 36

While entries like this, in which payments are made to groups with definite political or public policy agendas, make up a small portion of the representation expenditures made by NEA headquarters, they suggest that the NEA national office has a very generous definition of what constitutes workplace representation. The NEA's contributions, gifts and grants schedule contains even more entries of this sort:

$5,000 each to the Gay and Lesbian Alliance Against Defamation and the Gay, Lesbian, and Straight Education Network

$25,000 to the Democratic Leadership Council

In a memo to its affiliates, NEA headquarters attempted to explain these items. NEA's "talking points" on its grants and contributions asserted, "NEA also has contributed to outside organizations that work on issues related to NEA's core mission of protecting the basic right of every child to a quality public education."[38] But numerous grant recipients here are only tangentially involved in educational issues - from any perspective. While these particular line items by themselves make up small portion of overall NEA headquarters spending, they lend credence to NEA critics who allege that NEA is more deeply involved in political activism than is publicly acknowledged, to the detriment of public school teachers and support staff who rely on NEA and its affiliates for representation on matters of pay, benefits and working conditions.

Overall, we estimate that only 29.5 percent of NEA/MEA members' dues are ultimately spent on representation expenses. Representation costs are exceeded by overhead, which makes up 43.1 percent of overall NEA/MEA spending.[39] Our summary of combined local, MEA, and NEA spending is as follows:

[30] Of the two Defense Department school teachers unions, one, the OEA North East Asia Teachers Association, reported no representation expenses, while the other, the Stateside Region FEA, had overhead costs in excess of representation. LM-2 forms for FY 2006 filed by NEA/OEA North East Asia Teachers Association and Stateside Region FEA.

[31] Author's calculations based on LM-2 for FY 2006 filed by the Florida Faculty Association.

[32] Author's calculations based on LM-2 for FY 2006 filed by the Michigan Education Association.

[33] Author's calculations based on LM-2 for FY 2006 filed by the Michigan Education Association.

[34] Author's calculations based on LM-2 for FY 2006 filed by the National Education Association.

[35] The Campaign for America's Future, available online at: http://www.ourfuture.org/about.

[36] The National Coalition on Health Care, available online at: http://www.nchc.org/about/.

[*] It should also be noted that compared to the Department of Defense school unions, or the NEA and MEA themselves, the Florida Faculty Association has a relatively high percentage of it spending dedicated to representation. 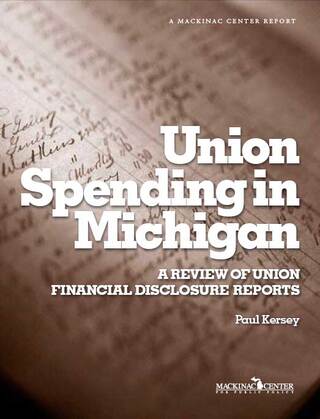