Alternative energy subsidies: Yes or no? 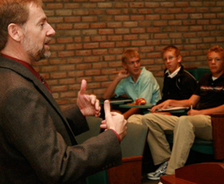 Mike Winther, a debate coach and frequent lecturer, talks to high school students about arguments for and against alternative energy subsidies. This event, at Grand Valley State University, was one of four debate workshops hosted by the Mackinac Center for Public Policy throughout Michigan. Winther, of Modesto, Calif., is a member of the MCCP Board of Scholars. 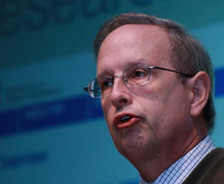 Nearly 9,000 students, teachers and coaches have participated in the Center's workshops since 1988, gaining insight and knowledge about each year's debate topic, as well as tips on research, affirmative and negative arguments and how the issues play a role in an expanding global market.

Students attending the workshops are invited to participate in an essay contest on the topic and win one of four $1,000 college scholarships.

In written comments, teachers and students said they valued the workshop series.

"Because of this workshop, I know I will have a much more successful debate season," wrote Molly Tompkins of Traverse City Central High School.

Nick Kloka, debate coach and English teacher at Saginaw Heritage, wrote, "I have brought my students to this event for several seasons now, and as a teacher I am never disappointed." Students from Kloka's program won scholarships after both the 2006 and 2007 workshops.

Speakers again this year were Dr. Rich Edwards, a communications professor and debate coach at Baylor University, Texas; Greg Rehmke, editor of EconomicThinking.org and a frequent writer and lecturer on debate topics; and Mike Winther, a frequent lecturer and debate coach from Modesto, Calif.