Cities must attract the new "creative class" with hip neighborhoods, an arts scene, and a gay-friendly atmosphere - or they will go the way of Detroit. - Richard Florida, author of "Rise of the Creative Class," Salon, 2006.

Detroit recently played host to "Creative Cities Summit 2.0," a conference based on the premise that urban development can be made to happen by harnessing the alleged economic prowess of America's "creative class," the definition of which encompasses occupations as diverse as engineering and filmmaking.

Among the attendees was the high priest of this concept Professor Richard Florida, whose 2002 book "The Rise of the Creative Class" popularized the notion that attracting this creative class is the key to making cities new economic powerhouses. 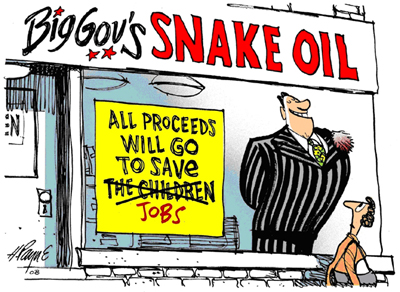 Here's the most important thing about the concept: It's nonsense that not only isn't supported by the facts, it's contradicted by them. That's the conclusion of Steven Malanga of the New York-based Manhattan Institute, who has examined the record behind many of Richard Florida's specific assertions.

Most damning, the cities Professor Florida deemed to be "creative" in his first book could not be shown to actually have had more vibrant economies than cities that didn't qualify as creative. Malanga found that from 1983 to 2003, his creative cities underperformed the national economy in job growth, and were even more soundly trounced by un-cool cities he described as "stuck in paradigms of old economic development." They only looked good in one narrow time range - just prior to the bursting of the 1990s Internet stock bubble.

Despite that, Professor Florida has parlayed this concept into a "creative" cottage industry for himself, authoring three books on the subject, writing a syndicated column, operating a consulting firm and collecting speaking fees. This month alone he is scheduled to talk about the creative class in locales as varied as Detroit and Tuscany, Italy.

Unfortunately, many governments and certain government-friendly private associations have embraced the fad. The head of one of those associations, Doug Rothwell of Detroit Renaissance, said that areas implementing the concept would be converted into "epicenter(s) of the creative movement, with its powerful economic impact, that is helping us to rethink and redesign our cities."

Gov. Jennifer Granholm is another believer. Through 2006 the "Cool Cities" program she's championed had handed $4.4 million in state "catalyst grants" to 28 Michigan cities. Detroit - America's poorest big city according to Census data - on 10 different occasions received grants totaling $1 million, and yet both the cool and un-cool alike continue to flee.

Given its empirical record, why is the creative class concept so popular with politicians and bureaucrats? Steven Malanga concluded that it allows government officials to avoid the difficult tasks of reducing business costs and regulatory burdens -"eat your vegetables" approaches that powerful special interests like government employee unions find yucky - and instead just hand out the "candy" of increased spending on things like bike paths, loft housing subsidies and other features that allegedly attract the cool and creative.

Malanga's observations are backed up by other scholarly research. A 2006 article by economist Todd M. Gabe in the peer-reviewed academic journal "Growth and Change" used a "shift-share" analysis of so-called "creative occupations" to test whether pulling a large creative class of people into a city or regional orbit may facilitate economic development and growth. Shift-share analysis is a popular technique for locating sources of employment decline or growth.

Gabe found that the performance of "creative" economies "varied widely across the U.S." and that "an initial strong presence in the creative economy is not a prerequisite for future growth." Variables that may encourage growth in the creative sector may change so quickly from being cool to un-cool that "occupational targeting" may defy planning.

Common sense informs us that while people have many motivations, simple economic self interest is right up there with the most powerful of them. Over time, nations, states and cities enjoy sustained growth and prosperity when they provide a reasonable cost of living, a business climate that doesn't chase away job-providing investors and entrepreneurs, public safety, and the protection of property rights. In the absence of these no amount of trendy bike paths, loft apartments, street performers and the rest are sufficient to attract the middle class families that history shows are the lifeblood of any prosperous and thriving polity.

How to Make Cities "Cool"

Trying Too Hard to Be Cool

The Price of Cool

Michael D. LaFaive is director of the Morey Fiscal Policy Initiative and Jack McHugh is senior policy analyst at the Mackinac Center for Public Policy, a research and educational institute headquartered in Midland, Mich. Permission to reprint in whole or in part is hereby granted, provided that the authors and the Center are properly cited.