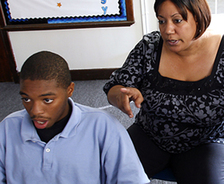 Detroit Midtown Academy teacher Michille Few works with senior Corbin Stephens in class. The academy is a public charter school in Detroit. State law provides for the opening of more charter schools in Detroit if enrollment in Detroit Public Schools drops below a given threshold, though legislation has been introduced to amend that statute. (AP Photo/Gary Malerba)
(Editor's note: The dollar amount of the Detroit Public Schools budget deficit was incorrect in the initial posting of this article, and has been corrected.)

Declining enrollment in Detroit Public Schools has opened a window for potential change in a district already under scrutiny for a $400 million budget deficit, low graduation rates and an audit showing lack of planning and oversight.

State legislators are now discussing the future of the district's "first-class" status, a designation based on enrollment that is written into Michigan's Revised School Code and the State School Aid Act. The designation gives Detroit certain privileges - among them protection from some charter public school growth - but also places certain requirements on the district school board.

Until a month ago, both laws required a first-class district to have enrollment of at least 100,000 students. Theoretically, Detroit lost that status in September when preliminary enrollment figures put the headcount at about 88,000.

Anticipating the drop, legislators already had agreed to change the language in the State School Aid Act to designate a first-class district as one with 60,000 or more students. The move effectively protects certain financial benefits, such as the district's right to collect pro-rated state aid for transfer students, but also continues certain requirements, such as competitive bidding for construction projects.

Legislators have not changed the Revised School Code, which still defines first-class as a district with 100,000 or more students. If lawmakers leave that language alone, and if Detroit fails to meet the threshold even after enrollments are audited, then a number of possibilities emerge, some that would give parents more choice in education and some that could restrict it.

"From a public policy standpoint, this is a nightmare," said Jeff Williams, vice president of Public Sector Consultants Inc., a Lansing-based consulting firm that analyzed the first-class issue for the Skillman Foundation of Detroit. "I don't know why this didn't come up sooner. It is clearly in the interest of the state, the Legislature ... and the students to have a discussion."

The issue has implications for charter schools, other conventional public schools and, in general, the balance of "reform versus assistance" that legislators and the Detroit school community have wrangled over in the past.

"I'm about getting to a place where students actually are learning and parents have confidence in their school system," he said. Kuipers is chairman of the Senate Education Committee. "Some of it will be choice and some will be accountability."

The school code makes it clear that if Detroit loses first-class status, then Bay Mills Community College and Wayne County Community College would gain the right to authorize new charter public schools in the city. Nearly 30,000 children who are assigned to Detroit Public Schools were enrolled in charters as of 2007.

Other potential charters could suffer, though. There also is language in the Revised School Code that prohibits certain types of charter public schools - called urban high school academies - from operating anywhere except in a first-class district. Two such academies already are in operation, and a third is scheduled to open in 2009. State law allows up to 15 such academies, but the question remains whether lack of a first-class district would put a damper on efforts to open more.

State universities also are allowed to grant charters, but only to a maximum of 150 statewide. That cap was reached in 1999, so new university charters are generally granted only when an existing school closes. That rule, plus Detroit's first-class status, has prevented dozens of organizations from opening charter public schools in metro Detroit, according to Gary Naeyaert, vice president of public relations and academic affairs at the Michigan Association of Public School Academies.

"We're counting on this window to do something real in the way of educational reform," Naeyaert said. "All of these issues are going to be in the mix."

Joining that mix is the state's new "21st Century Schools" initiative, which provides seed money for new or redesigned high schools in districts with less than a70 percent graduation rate. Charter and conventional public schools can apply for the funds.

If DPS loses first-class status, language in the school code also appears to give other conventional public school districts the opportunity to open satellite programs in Detroit by removing Detroit's veto power over such arrangements.

"This is a point of great contention," Williams said. The language itself is open to debate, but the larger question is whether neighboring districts would make the move.

Dr. Arthur Carter, superintendent of Highland Park Schools and former assistant superintendent of Detroit Public Schools, said that financing, community support and programming all would play into such a decision.

"I don't see one school district moving into another as practical," he said.

Detroit and Romulus Community Schools went to court over the same issue in 1997, after Romulus opened an alternative education school in Detroit. The Michigan Court of Appeals ultimately ruled that the state's schools-of-choice law did not permit Romulus to collect aid for students it enrolled at a location outside its own geographic boundaries.

"I'm not sure if everybody has checked all the windows there," Carter said. "I believe, as we are attempting to do here (in Highland Park), in creating programs to attract students without invading anyone's territory."

But Williams pointed out that other districts might see things differently, particularly those that already have been successful in attracting Detroit students. Under existing schools-of-choice laws, about 5,500 students assigned to Detroit Public Schools chose to enroll in other school districts in Wayne County as of the fall of 2007.  That includes about 2,200 who attend Highland Park schools.

At Dearborn Public Schools, which does not participate in schools of choice outside its own district, Superintendent Brian Whiston said that he does not see the benefit of more student migration out of Detroit schools.

"I don't see how taking away more kids is positive, but we have to meet the needs of those kids," he said. Calling it "just thinking out loud," he said it might help to restructure DPS into smaller, more manageable entities, giving each one local control.

"I think giving control closer to parents would be better," he said.

Several other metro Detroit superintendents did not return calls to Michigan Education Report.

According to a 1990 report by the Citizens Research Council of Michigan, the state began classifying school districts by their enrollment as far back as 1927.

A system of first- through fourth-class rankings remained in effect for decades. As of 1990, the threshold for a "first-class" district was 120,000 students, and only Detroit Public Schools met that mark.

It appears that one historical reason for ranking districts by enrollment was to give financial incentive to smaller districts to consolidate. (Michigan had more than 7,000 school districts at one point, most of them one-room schoolhouses.) First- and second-class districts were barred from consolidation, but smaller districts that merged were guaranteed a certain amount of state funding, according to the report.

For example, the statute says that members of the board of education in a first-class district may not have a personal interest in any contract authorized by the board. Also, they must take a roll call vote on any action creating a liability or debt. Per diem payments to board members are capped at $30.

If Detroit loses first-class status, those restrictions would no longer apply, Williams pointed out.

But an independent audit by the Washington, D.C.,-based Council of the Great City Schools concluded that past reform has not brought long-term change to Detroit. Parents continue to move their children out of the system; test scores and graduation rates are below the state average, and state Superintendent of Public Instruction Michael Flanagan has determined that the district has a "serious financial problem" meriting review by a state-appointed team.

Released Oct. 1, the audit says the district lacks strategies for academic improvement, facility use and budgeting.

As a district, DPS did not make "adequate yearly progress" in 2007-2008 under the terms of the federal No Child Left Behind Act, but there are large variations in academic reports about individual schools.

According to the latest Michigan School Report Card, 82 DPS buildings met AYP standards last year; 100 did not. Of those that did not, about half are in some phase of required school improvement, up to and including implementation of a restructuring plan. (Improvements are not mandated unless a school has failed to make AYP for two consecutive years.)

Similarly, though the Michigan Department of Education puts the district's overall graduation rate at 58 percent, the rates at individual high schools vary from 50 percent to 97 percent in more traditional settings but much lower in specialty settings, such as alternative education or schools serving teen parents or students who have been expelled from other schools.

Michigan Rep. Bettie Cook Scott, D-Detroit, has introduced legislation that would amend the school code and lower the threshold for a first-class district to 75,000 students. Introduced in February as House Bill 5765, the proposal remains in the House Education Committee.

Kuipers said he plans to propose legislation that would address both new accountability measures in Detroit as well as more school choice, saying at one point that the state needs a plan that "won't allow the (Detroit) district to spiral out of control," but also that "competition is part of that, but not competition for competition's sake."

"I've actually reached out to some of the delegation from Detroit to say, 'You have to be engaged in this,'" Kuipers said. "I've been excited by their willingness to explore some options."

Past reform efforts suffered from lack of buy-in among the Detroit community, he said.

The goal should be improved education for children, he said. "We've got to be talking about results."

Sen. Irma Clark-Coleman, D-Detroit, declined through a spokeswoman to be interviewed for this article. During school appropriations hearings earlier this year, Clark-Coleman pointed out that losing first-class status could allow not only charter schools but other conventional public schools to open programs within DPS boundaries.