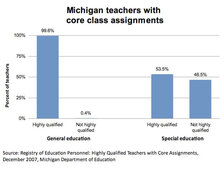 (Correction: The article below was originally posted on Sept. 2, but was revised to correct errors regarding the number of highly qualified special education teachers.)

Earlier, Michigan had reported that 99 percent of all its core classes, including special education courses, were taught by teachers who met highly qualified standards set by the federal No Child Left Behind Act. But the state was required to conduct a recount after the federal department learned that Michigan considered special education high school teachers "highly qualified" if they had passed an elementary-level content examination. That's not enough to demonstrate their knowledge of the subjects they teach, federal officials said.

Michigan now has until June 2009 to comply with federal standards or face potential loss of funding through the Elementary and Secondary Education Act.

Most of the problem is at the high school level involving teachers who are the primary instructors of special education students in core courses like English, math and science. Those courses generally include students who have such conditions as specific learning disabilities or mild cognitive impairments, but who follow a general education curriculum, sometimes with modifications.

Not every district is affected. Only 246 districts reported using special education teachers in core content assignments and, of those, about 137 said one or more of their teachers were not highly qualified. In total, the report cites 1,432 cases out of 3,077, or 46.5 percent, in which teachers were not considered highly qualified. One teacher could be counted multiple times in the data, depending on his or her assignment.

Marcie Lipsitt, a parent activist who first alerted the U.S. department to Michigan's use of the elementary test, has pushed for Michigan to require high school special education teachers to demonstrate core content knowledge. In her work as a volunteer advocate for students, Lipsitt told Michigan Education Report, she has encountered cases in which high school special education teachers have had little to no college coursework in some subjects they teach.

"How on earth can a kid learn algebra ... with a teacher who has absolutely no training in algebra?" she said, adding that it should not come as a surprise when high schools fail to make adequate yearly progress because students with disabilities do not score well on standardized tests. "They're not being taught. Why are we surprised?"

At this point there are two main ways that school districts can come into compliance with the federal standards:  shift teachers and students into settings that do not require highly qualified teachers, or re-qualify teachers using alternative guidelines.

A number of Michigan districts already have made plans "which included more co-teaching and mainstreaming ... and the utilization of secondary special education teachers in a support and/or resource role," the MDE reported to the federal department.

Schools districts also can reassess teachers who earned "highly qualified" status on the basis of taking the elementary content test. Those teachers can continue to be considered highly qualified if they:

"My sense is that all of those options are being used. It depends on the district," said Anthony Thaxton, executive director of the Michigan Association of Administrators of Special Education. Some districts already have made changes.

While the strategies above would bring Michigan into compliance, Lipsitt said she questions whether some, like presenting a portfolio, are rigorous enough.

"Children with disabilities have a right to a seat in a classroom that's going to bring them meaningful educational benefits," she said. In many cases, she said, that means small classrooms with a teacher trained not only in special education methods, but also in the subject matter they teach.

Michigan had asked the DOE for a waiver to allow teachers who received highly qualified status based on the elementary exam to retain that status, while removing the option for future teachers.

But in denying the request, the DOE responded that, "... (H)aving a qualified teacher in each classroom is one of the most important ways in which we can improve student achievement."

In contrast, the same report noted that 99.6 percent of all general education core classes are taught by highly qualified teachers.