State board, nonprofit group at odds over Camp Tuhsmeheta 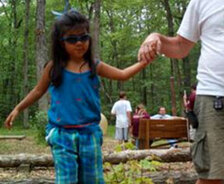 Shaleah Glas, of Kalamazoo, walks along a log at Camp Tuhsmeheta during a program for children with visual impairments and their families. Her father, Don Glas, holds her hand.

When Gwen Botting first learned that her young son was visually impaired, her thoughts went to other blind people she’d known — her great aunt and her grandmother.

The great aunt, after losing her sight as a complication of diabetes, continued to tend her garden, split wood and cook on a wood-fired stove.

The grandmother, Botting said, “let her blindness ruin the rest of her life.”

“When I discovered I was going to have a blind child, I knew which one I wanted for my kid,” she said, turning to look at the blond teen-ager beside her. 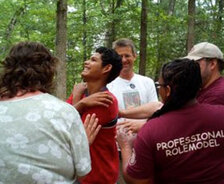 Camilo Glas, of Kalamazoo, folds his arms across his chest and relies on fellow campers and counselors to catch him as he sways from side to side. Glas said one of his favorite camp activities is boating.
More images …

Now 14, Greg Botting will be a freshman this fall at Ionia High School. During his middle school years he completed a general education curriculum, joined classmates on a service learning trip to Costa Rica, ran track with the help of a guide and won the school’s Courage and Valor Award.

In a society in which “there are still 100 different ideas on how to raise blind children,” Botting said that her philosophy from the beginning was to force her son to become independent.

That’s the general philosophy at Camp Tuhsmeheta, where Greg Botting is a camper and his mother a longtime volunteer. The 300-acre state-owned parcel of land is located along a chain of lakes near Greenville. Opportunities Unlimited for the Blind, a nonprofit organization, offers programs there for children with visual impairments, but the group hit a stumbling block recently as the executive director resigned and said fall and winter programs could be canceled.

The organization has had a dismal fundraising year, according to executive director George Wurtzel, given the state economy in general and smaller donations from individuals and corporations. On top of that, the group is currently at odds with the Michigan State Board of Education over the site, with Wurtzel saying that a lack of support from the state for the organization’s work was one reason he stepped down.

Wurtzel told the state board of education at its meeting on Aug. 13 that he has resigned, saying, “I’m leaving because I can’t deal with the politics anymore.”

The state purchased “Camp T” in 1971, using money that had built up over decades in a trust fund to benefit the visually impaired. The state board of education is responsible for oversight of the fund and the property and allocates money for use at the site through a trust fund committee. The fund stands at about $2.7 million, but yearly allocations fluctuate depending on the investment income generated.

The state ran its own summer programs at the camp for a number of years, working through the now-closed Michigan School for the Blind. As attendance at that school dwindled over the years, so did camp programming. By 2002, Wurtzel said, the camp served only 16 children in four weeks of summer programs. No program was offered in 2003, and the state put out a request for bids in 2004, looking for an organization to take over programming.

OUB, whose members include a number of people formerly involved at the school for the blind, was the only group that responded.

By 2007, OUB was offering 10 weeks of summer programs as well as weekend events throughout the year, Wurtzel said. About 40 percent of the organization’s funding comes from private donations; an additional 25 percent comes from camper fees and another 25 percent from a youth employment program sponsored by the Michigan Commission for the Blind.

The state board and OUB have agreed to a three-year lease under which OUB would continue to use the grounds for its programs, but in May the board voted not to implement the agreement until OUB provides it with an independent financial audit. Wurtzel said the organization is working to comply with that request, but is frustrated by the added expense.

OUB has given the board an “accountant’s review,” an internal financial statement smaller in scope than an audit, but state board member Elizabeth Bauer pointed out to Michigan Education Report that the figures in that report were from 2006, which wouldn’t reflect extra money the camp received the following year. The board has requested an independent audit for some time, she said.

“We just don’t want to be handing out money willy-nilly and not know where it goes,” she said in a telephone interview. Bauer is a member of the trust fund committee.

Though the committee usually allocates money to the camp only for maintenance and physical improvements, in 2007 it agreed to provide an additional $40,000, at OUB’s request, for programming. The money was routed through the Michigan Commission for the Blind, which used it to secure matching federal funds, putting the total available at about $200,000. Of that, about $90,000 went to the camp, and the commission used the remainder in other programs.

Wurtzel said OUB believes more of the trust fund money should be dedicated to the camp and that if OUB were not involved, then programming at the site would once again dwindle. The group has approached legislators about drafting a bill to sell the site to OUB for a nominal amount. A 2007 appraisal put the market value at $2.38 million.

The trust fund money is not restricted for use just at the camp, however, and Bauer told Michigan Education Report that other groups might be interested in applying for funding for other programs.

Three state board members visited the facility in August, and told fellow board members they were impressed with the physical improvements. Bauer said she remains convinced that the property should remain in state hands.

“It’s a very good piece of property. We should use it to the fullest,” Bauer said. “It makes me think there may be ways we can have more participants, not just Opportunities Unlimited for the Blind.”

Wurtzel said OUB programs emphasize the self-reliance and practical living skills that blind children need, but don’t get enough of, at home and in school.

“We make kids be responsible for getting from Point A to Point B by themselves. … Far too often, parents lead their kids around because that’s the easy way. Who’s going to lead them around when they’re 56?” he asked in an interview at the camp in early June.

The campers also make their own beds, clear their own dishes and take care of their own possessions, in addition to gardening, fishing, woodworking and tackling agility courses. Those might seem like typical camp experiences, but they are planned carefully to match the “expanded core curriculum” for children with visual impairments, Wurtzel said.

“Expanded core curriculum” refers to the idea that, in addition to learning math, science, English and social studies, children who are blind need specific instruction in mobility, orientation (locating and returning objects), use of technology, and culinary, social, recreational and daily living skills.

“Things you or I learn by watching, these kids don’t get,” said Dawn Staley, a teacher consultant with the Traverse Bay Intermediate School District who worked at the camp this summer. Sighted children pick up social clues from such things as a frown or a nodding head, which blind children miss, she said as an example.

“Those are the things we work on endlessly here,” Wurtzel said. “The school districts are mandated to do all those things, but they don’t have the resources.”

OUB also makes it a point to hire staff members who are blind, not just to be role models for campers, but in order to give the young adults work experience. One of them is Adrianne McDempsey, a senior camp counselor from Muskegon.

As the child of parents who “never babied me,” McDempsey said she was surprised to meet 14-year-old campers who could not cut their meat. One young camper “was terrified to take a step alone,” she told Michigan Education Report during an interview at the camp in June.

Several parents, professionals and volunteers testified on behalf of the camp at the state board meeting.

“We need your help. We need to keep this going because it’s important for kids,” Sharon Burton, a camp volunteer and Lions Club member, told the state board of education.