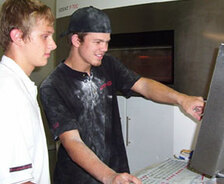 Looking for a way to take care of that pesky algebra II requirement and still get a head start on a career?

That’s why, as of this fall, the Livonia Career Technical Center will pilot a program that weaves advanced math into subjects like building trades, medicine and marketing, enabling students to study both subjects concurrently. Beginning the following year, students who successfully complete such a class will be eligible to receive half a credit in algebra II.

Ron Wilson sits behind an array of objects designed by his students at the Livonia Career Technical Center. A local firm builds prototypes of the students’ work, giving them the chance to see finished versions of their CAD efforts.
More images …

Haas sees it as a win-win: Students earn math credit in a setting that interests them, and the center protects its enrollment.

“That’s the only way you’re going to survive the high school requirements,” Haas, the school principal, said in an interview in her office.

By survive, Haas means finding a way for students to continue taking career education courses now that they must complete four years each of English and math, three years each of science and social science, plus assorted other courses in order to receive a high school diploma. In a traditional six-period day, fitting in those requirements could put the squeeze on non-required classes like band and career education.

But when the Legislature set those requirements — beginning with the class of 2011 — it also gave school districts the option to offer them through a career education program, as long as the local board of education ensured that all the required content was covered. Since then, districts across Michigan have been looking for ways to offer English through fashion design, math through automotive engineering and biology through cosmetology.

Like a lot of Michigan educators, Haas believes algebra II will be the biggest stumbling block for many students. If algebra I is any predictor, she is right. The statewide failure rate in that subject in the past year was estimated at 20 to 30 percent.

“That is the hardest thing they (students) will have to face,” Haas, herself a former math teacher, said. “I’m very concerned.”

LEARNING MATH IN MANY WAYS

But students can succeed at algebra II, she and teacher Ron Wilson said, given the right environment, instructional style and support.

“It’s all in the instructional strategies,” Haas said. In addition to the standard lecture format, she anticipates the career center will use small group instruction, student-to-student assistance, computer-based individual instruction and potentially video-based instruction to deliver math content. A math resource teacher also is available.

Many career or technical courses already have a significant math component, Haas said, such as the use of probability in marketing, but to give half-credit in algebra II she had to demonstrate that sufficient content will be included. Like a number of other districts, her staff has “crosswalked” the career and math curricula, first finding common ground and then addressing gaps.

At the Van Buren Technology Center, operated by the Van Buren Intermediate School District in southwest Michigan, students can earn academic credit in math, science, visual/performing arts or civics, depending on which of the 29 career programs they choose, according to Sue Conklin, director. They also can meet the new state requirement for an “online experience.”

The center has offered academic credit for some time, but a year ago revisited the system to meet the terms of the new Michigan Merit Curriculum for high schools. The district determined, for example, that its allied health program contains enough English and biology content to offer academic credit for those subjects. Law enforcement students can earn half a credit in civics and commercial art students can earn credit for visual arts. The actual credit is granted by each student’s local school district, not by the Technical Center.

In some cases, students have to complete additional work inside or outside of class in order to earn the academic credit along with the elective credit that the career class offers, Conklin said.

“Our academic staff monitors them to make sure they meet the requirements,” she said. Those teachers also may team teach with career and technical educators.

Similarly, Oakland Schools is offering credit in math, science and English in various programs at its four technical centers, assigning highly qualified teachers from each of those disciplines to each campus.

“What we’ve really done is shown that we … accept the rigor of the Merit Curriculum,” said Mary Kaye Aukee, director of Career Focused Education. As an added plus, she believes the opportunity to study math or English in a context they find relevant will keep students interested.

“We’ve always known in CTE that some kids learn by doing and seeing,” she said. Some students might find English grammar more relevant when learned along with Web design, for example. “All of a sudden, the English means something. … It’s a way for us, I believe, to decrease the dropout rate.”

Students who don’t need the academic credit can opt out, possibly spending more time at job sites or in technical training, she said.

Technically, this year will be a trial run in Livonia, Haas said, since this year’s juniors and seniors do not fall under the new graduation requirements. That gives the center a year to tweak the plan.

The algebra component of a career course will not be any easier than standard advanced algebra, according to Haas and Wilson, a teacher in the center’s engineering program. Nor should it be, they said.

“I know it (advanced math) is necessary for my students to be successful,” Wilson said.

Nearly 1,000 students are enrolled in courses at the Livonia Center. Haas and Wilson are interested in protecting that number not just to stave off program cuts, but because, they say, career and technical education is so important to individual students and to Michigan at large.

“The old ‘oil change’ concept was a hard nut to crack,” Haas said, referring to the idea that CTE programs are spots for non-college bound students looking for blue-collar work.

In contrast, today’s CTE student is more likely to be studying digital graphics, computer network administration, allied health or engineering technology. They also are likely to either earn college credit as they study — Livonia has articulation agreements with five colleges and universities — or to earn industry-direct certification.

“I no longer use the word ‘shop’ or ‘vocational school,’” said Peter Varbedian, a senior staff specialist in the Rochester Hills office of Fanuc Robotics America Inc., a leading supplier of industrial robots and robotic systems. “I say career and technical education.”

A Livonia graduate and former student of Dr. Haas, Varbedian said many technology-based firms like Fanuc are worried about a future shortage of skilled technical workers. To help fill that gap in their own industry, his company has developed a program through which a high school or college can buy an industrial robot and the software and accessories needed to teach students how to program and operate it. Fanuc invited a handful of Livonia students to test the program during development.

“I believe the future of CTE is to have that support from industry,” Haas said.

In another real-world link, Wilson’s students send designs they created with CAD software to nearby JonaTek Products to be made into prototypes. Company president Kevin Jonatzke said he approached Wilson with the offer because of his own frustration in school.

“I’d design it, get graded, and nothing would happen,” Jonatzke said, who previously worked as an engineer in the automotive and aerospace industries. Now, students receive a finished version of the glue bottles, hammers and hair dryers that they designed in the computer lab. It puts a finishing touch on the process, and also helps students spot their own design flaws, Jonatzke said.

JonaTek creates prototypes using a process called laser sintering, in which a sand-like mixture of nylon and glass is spread in thin layers across the floor of an enclosed chamber. A laser scans the mixture and selectively fuses bits of it together based on the CAD design. After all the layers are applied, the extraneous “sand” is brushed and blasted away, leaving the prototype intact.

In the future, Jonatzke said, he would like students to send him more complicated designs for items with multiple parts that must fit together. On his end, Wilson believes students only benefit when business and industry become involved in his classroom.

“I love going into industry to see what’s going on,” Wilson said. “They key is to make them part of this (career and technical education) program, so they have ownership. That’s what I like to do.”