Schools get credit for improved scores, even if students don’t ‘pass’ 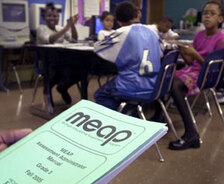 In this 2005 photo, a classroom teacher in Buena Vista uses the Michigan Educational Assessment Program administrator manual to prepare his class for the standardized test. Under Michigan’s new growth model, schools will receive credit for improvement in student scores, even if the students do not earn a “proficient” score on the tests. (AP Photo/Jeff Schrier)

Michigan schools now get credit for students who have made headway in reading or math — but still are not proficient — in their effort to meet the academic bar set by the No Child Left Behind Act.

The new formula will make it easier for some schools to make “adequate yearly progress” and avoid sanctions under NCLB, although only a relatively small number of students are involved, according to the Michigan Department of Education. Nationwide, critics of NCLB have long said that schools deserve credit for improvement, not just proficiency, while others say that NCLB provisions already have been watered down enough.

“Teachers often work with low-scoring students and make improvements in the achievement of individual students, but despite considerable gains, those students may not make it all the way to proficient,” the state’s Growth Model Pilot Application stated. That application has since been approved by the U.S. Department of Education, as have growth models in nine other states.

“It (the proficiency-only model) doesn’t account for where kids start out,” Dr. Joseph Martineau, director of the state education department’s Office of Educational Assessment and Accountability, told Michigan Education Report in a telephone interview.

The MDE calculated that between 4,000 and 8,000 students — between 0.7 and 1.3 percent of all fourth- through eighth-graders — would have been added to the plus side of NCLB calculations statewide if the growth model had been used in 2006. In general, students are “on trajectory” if they make enough gain in one year that, by repeating that gain in the next two years, they would be at the proficient level.

Martineau said the department doesn’t yet know how many individual schools will make AYP this year due to using the growth model because his department’s analyses are still under way. A press release from the department said the number will be “modest.”

The model is used only for fourth- through eighth-grade students and only for math and language arts scores, the two subjects that fall under NCLB mandates.

The growth model comes at the same time as a jump in Michigan’s AYP targets of about 10 percentage points across the board. That means that the latest test score results are being measured against a higher bar. For example, schools now must show that 54 percent of their middle-schoolers are proficient in math as a sign of adequate progress. Last year, 43 percent would have been enough.

The targets will remain at 2008 levels until 2011, when they take another 10-percentage-point jump, then will increase annually until 2014, the year when schools are expected to reach 100 percent proficiency.

Critics of NCLB have long said that it does not give schools enough credit for student improvement, especially among disadvantaged or minority populations. They point out that a school could show significant gains among low-performing students, but if those students don’t “pass” the state test, the school still must begin mandated improvement efforts like allowing students to transfer, offering free tutoring or replacing staff.

“It is very frustrating to make significant growth but not have that acknowledged,” Leslie Holland, executive director of the High Priority Schools Initiative in Wayne County, told Michigan Education Report. “I would say putting a growth model in place gives teachers incentive.”

The High Priority Schools Initiative, based at the Wayne Regional Educational Services Agency, works with schools that have been identified through NCLB as needing improvement.

Holland said the growth model potentially could help educators zero in on which low-performing students show the most improvement, and then track the teaching practices that led to that growth. However, she added, it also adds one more layer of data for administrators and teachers to analyze, in a system that already is data-heavy.

If meeting AYP depends on passing the state test, then the tendency is for teachers to focus on students who are close to passing, Martineau said.

“It (a growth model) really gives hope for kids who are really far behind,” he said.

TOO MUCH WIGGLE ROOM?

But others say enough is enough when it comes to giving schools leeway on NCLB.

Education Sector, an independent education think tank headquartered in Washington, D.C., supports the concept of growth models, but is critical of other NCLB adaptations, including some used in Michigan. In a report called “The Pangloss Index: How States Game the No Child Left Behind Act,” author Kevin Carey says that the NCLB has become “comically lenient.”

For example, most people assume that a Michigan school makes AYP based on the number of students who pass the Michigan Educational Assessment Program in a given year. That is the lion’s share of the formula — but not all of it.

Schools also can make AYP through multiyear averaging, which means that schools that do not make AYP based on their current year’s scores can average those results with the previous one year or two years if it helps them meet the state target.

Martineau said that in some cases a multiyear average is a better assessment, particularly among schools that hover near the edge. Without averaging, some schools would be identified as needing improvement one year, not identified the following year, but identified again in the third year, he said, even though the quality of that district is unlikely to have changed significantly year over year.

“It stabilizes those results,” he said.

Martineau said the state department did not have a tally of how many Michigan schools made AYP in the most recent year based on multiyear averaging because the system does not track that information separately.

Although a number of states use averaging, Carey said the practice is inherently biased, since the only possible outcome is to identify fewer schools as low-performing.

“Everything is weighted toward reducing the number of non-AYP schools instead of identifying students who need help,” he said.

If a school’s averaged scores still don’t meet the target, then a school can make AYP through “Safe Harbor,” a provision written into NCLB itself. Under this plan, a school must show that, even if it doesn’t have enough proficient students, it has at least decreased the number of students who are not proficient by 10 percent from the previous year.

In 2006-2007, 126 Michigan schools reached AYP through the Safe Harbor provision, according to Martineau.

Michigan also surrounds each student’s MEAP scores with a “confidence interval” designed to account for measurement error. A confidence interval is based on the premise that scores are affected by such things as testing conditions or chance error, Martineau explained.

Those conditions could cause students’ actual score to be higher or lower than their true ability, he said. To accommodate for this, the state counts some students as “provisionally proficient.” This includes students whose actual scores were slightly below the passing score, but still fell within a specific range.

In Michigan in 2005-2006, nearly 80,000 elementary students were counted as “provisionally proficient” in language arts and nearly 160,000 in math, according to the MDE growth model application. Provisional students are counted as proficient for the purposes of determining adequate yearly progress. In fact, one reason that the growth model will involve relatively few students is that a number of them already are considered “provisionally proficient.”

While states generally describe NCLB adaptations as ways to be more fair and accurate in evaluating schools — and all of the adaptations have the approval of the U.S. Department of Education — the general result is that fewer schools are identified as needing improvement. Carey said that, taken cumulatively, that hurts children.

But Martineau said the adaptations are “things that are standard in statistical practice,” and intended to address problems with the NCLB model.

NCLB requires that a given percentage of all students in all tested grades reach proficiency targets in reading and math each year, and also that subgroups of students, such as major ethnic groups, students with disabilities, and economically disadvantaged students, reach those targets as well. If a school fails in one subgroup, it fails overall.

The model was intended to force schools to address the learning gap between minority or disadvantaged students and students at large.

“The use of subgroup data has brought attention to subgroups in a way we never had before,” Holland said.

But many educators question if the pass-fail approach to subgroup performance is fair.

“The law of the land when we were in school was equal access to education. Today it’s equal achievement on the same test on the same day. That’s really not realistic,” said Ron Koehler, assistant superintendent for organizational and community initiatives at the Kent Intermediate School District.

Besides allowing states to tailor the way they determine proficiency, the federal government now allows some states to tailor the way in which they deal with problem schools. As part of a pilot project, 10 states no longer have to levy sanctions in the order or method proscribed under NCLB. In Maryland, for example, principals will receive extra training rather than be removed from their jobs.

Michigan will not apply to change the way it works with schools identified for improvement, according to Martineau and Sally Vaughn, deputy state superintendent and chief academic officer of the Michigan Department of Education.

“We decided against it because the flexibility (it offered) was very minor,” Martineau said.