Kendreah Weber, left, and Austin Frank design and build a working model of an elevator. The project requires them to add circuitry to the model and write a computer program instructing the elevator when and how to operate.

Mark Kotula’s fist pumps the air as he announces his accomplishment to his fellow sixth-graders.

Gently rotating on the computer screen in front of him is the 3D image of a wooden mallet, the kind toddlers use in pound-the-peg games. To Kotula, the mallet is one more mission accomplished in technology class. To teacher Bill Rae, it’s one more seed planted in the effort to interest middle-schoolers in science, engineering, math and technology. 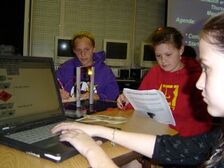 Sydney Scott, Becky Copeland and Jordan Paull take on the roles of mechanical engineer, electrical engineer and computer program engineer to design and build a working model of a traffic signal.
More images …

A teacher at Lake Fenton Middle School near Flint, Rae also is a master teacher in Project Lead the Way, a nonprofit educational program working to increase the number and diversity of students in engineering and related fields. With corporate partners, Project Lead the Way has developed a curriculum package for middle and high school classrooms with courses ranging from robotics to civil engineering to architecture.

The program uses a hands-on, problem-solving approach that Rae said appeals to students across the board. About 80 Michigan schools will have all or part of the Lead the Way curriculum in place by this fall, and Rae spends part of each summer teaching fellow educators how to implement the program in their classrooms.

"This was designed because kids weren’t taking classes to become engineers," he said.

That’s become a familiar cry among "STEM" — science, technology, engineering and math — advocates. Some say that the field suffers nationally from lack of rigor in K-12 programs, shortages of qualified teachers and declining enrollment in college programs. At worst, they say, America’s preeminence in engineering and technology are threatened.

Others disagree, saying that while K-12 programs need improvement, America remains the dominant force in science and technology worldwide. One question is how much of that dominance rests on foreign-born talent.

"We import a lot of our scientists and engineers from Third World countries," said Dr. Paul Kuwik, state director of Michigan’s Project Lead the Way affiliate, headquartered at Eastern Michigan University. "They realized the only way to turn this around was to make it an issue in K-12 public education. … There is a significant need for some kind of program to provide encouragement and preparation for STEM."

Project Lead the Way’s approach is to offer what it says is a rigorous, relevant curriculum to schools willing to make a commitment of time and funding. Participating schools must agree to provide specific computer software and hardware as well as supplies for hands-on projects. They also must send classroom teachers to a training institute, spend adequate time teaching the material, enforce math prerequisites, and track participating students’ postsecondary enrollment choices.

More than 75 teachers are expected to attend this summer’s institutes at EMU, studying under master teachers like Rae as well as professors from the university’s own engineering technology program.

"It’s fun when we get it. Once we get it, we’re all happy," said seventh-grader Angela Young as she and two fellow students worked to build a magnet-activated traffic signal.

Each member of the trio has a job: the mechanical engineer builds a working model of the signal; the electrical engineer wires the model to a computer and the computer engineer writes a program telling the signal when to turn from red to green.

"I like this class. It’s hard, but it’s fun," says Austin Frank, a sentiment echoed by a number of other students.

Rae, a former drafting teacher, said that by challenging students to solve everyday problems, Project Lead the Way courses answer the question, "Why do I have to know this?"

For example, to use Autodesk Inventor software to design a round peg with a 1-inch diameter, the students must know what "diameter" is. To use a formula that automatically calculates diameter, given the radius, a student must know both terms and how they relate.

In Rae’s classroom, Project Lead the Way is a hit. Nationally, it’s too early to say precisely what impact the program is having.

Still in the middle of a five-year independent assessment, findings to date show that the project appears to attract proportionately more minority students than college engineering programs do, but no more females. A study of college transcripts of former PLTW students showed that 40 percent of them chose engineering as a major, but without a control group of non-PLTW students for comparison, it is hard to determine if PLTW was the reason for those choices.

There are hundreds of programs at the state and national level — public, private and hybrid — that promote STEM education. Texas Instruments and Southern Methodist University in Texas collaborated on an engineering curriculum called The Infinity Project, now in use in 300 schools nationwide. The Ford Partnership for Advanced Studies, or Ford PAS, is a high school curriculum developed by The Ford Motor Company Fund and Education Development Center Inc. That program is in use at 300 sites in 26 states.

Public programs, too, play a role in STEM efforts. There are 33 regional science and math centers in Michigan, established by the state legislature to support K-12 science and math programs in local schools.

There also were more than 100 federally funded STEM education programs spread among 12 federal departments as of 2006, according to a report by the American Competitiveness Council. Created by Congress in 2005 to study STEM efforts, the council found that funding for those efforts totaled $3.47 billion in 2007, but that there was a "general dearth of evidence" about which programs were effective, since only 10 had undergone scientifically rigorous impact evaluations.

American students who enroll in STEM fields in college tend to drop out more than students in other disciplines, Kuwik said.

"I think it’s the rigor (of college) and the lack of preparation at the K-12 level," he said.

Scores on the National Assessment of Educational Progress, the national testing program conducted by the U.S. Department of Education, showed that 40 percent of fourth-graders nationwide and 31 percent of eighth-graders were proficient in math in 2007. Michigan’s numbers were 37 percent and 29 percent, respectively. In science, 27 percent of both fourth- and eighth-graders earned proficient scores nationally in 2005, the most recent year that test was given. Michigan’s numbers were 30 percent and 35 percent.

The STEM Coalition, an advocacy organization representing both education and industry groups, has asked Congress to give science equal status with reading and math under the No Child Left Behind Act, meaning schools would face sanctions if students didn’t meet science proficiency targets.

Project Lead the Way offers students a chance to demonstrate proficiency in the form of a two-day examination given at the conclusion of each high school course. Five Michigan universities with engineering programs are considering granting college credit to students who pass those tests, Kuwik said.

"Our goal is to have most universities in the state accept articulated credit," he said.

Of course, sometimes knowledge is its own reward, pointed out middle-schooler Shelby Beckman. When a seventh-grader can successfully design a sensor-driven traffic signal, "It makes you feel really smart."

Are there too few scientists and engineers in the United States? Maybe. Or, maybe not.

Some say the current supply is sufficient, but that there are not enough students in the pipeline to meet future demand. Others say that the United States relies too heavily on importing engineers from abroad. Still others report spotty problems in specific industries, but not a general shortage. And yet others say the workforce is large enough, but does not include enough women or minorities.

The National Science Foundation’s "Science and Engineering Indicators 2008" stated that:

Read the full report at: http://www.nsf.gov/statistics/seind08/start.htm