One strategy for improving teacher quality in the state that is commonly advocated by teachers unions, such as the Michigan Education Association, is across-the-board teacher pay raises. Proponents of this strategy argue that higher wages would draw higher-performing undergraduates into teaching. Advocates also claim that such pay hikes would address teacher supply shortages by encouraging workers in other fields to shift to teaching and by motivating teachers who have decided to stay at home to reactivate their careers.

Dale Ballou and Michael Podgursky have considered whether across-the-board pay raises would increase the quality of teachers by attracting a larger pool of higher-quality applicants to the profession.[87] Using academic ability as their measure of teacher quality, these researchers use a complicated equation from the field of labor economics to estimate that the likely effect on teacher quality of “a 20% raise — equal to the increase in real salaries over the 1980s — is not encouraging. Under plausible assumptions about teacher behavior, [the] average cognitive ability [of the teacher population would remain] below the mean for the college educated population.”[88]

They argue that several unintended negative consequences would likely result from such a reform. First, higher salaries would encourage older, already more expensive teachers, to remain on the job longer. This retention of older teachers would prevent the entry of many new higher-quality teachers attracted by the higher salary. Second, higher salaries without increases to the overall budget would quickly lead to layoffs, which would differentially affect newer hires. Ballou and Podgursky explain that such an unintended consequence undermines the whole point of offering higher wages to teachers in the first place, since the promising, newly hired teachers would be the first to be squeezed out. A third unintended consequence is that higher-quality applicants who are considering other career options would actually be deterred from teaching as the probability of obtaining a job offer falls with increased competition from higher numbers of applicants.

Writing for Michigan State University’s Education Policy Center, Susanna Loeb and Michelle Reininger offered yet another unintended consequence of a policy of substantial across-the-board raises. They explain that such a policy would lead to wasting limited resources to increase salaries in high-supply fields, such as elementary school teachers or physical education teachers[89]

Raising teacher salaries will not only have unintended consequences; it is also unwarranted in Michigan. National Education Association President Reg Weaver recently wrote that increasing the salaries of all teachers to make them “competitive with other professions that require a college degree” would be a way to use compensation to improve teacher quality[90] Perhaps teacher salaries are low compared to those of other degreed professions in some parts of the country, and attracting quality teachers to hard-to-staff areas of the state may well require a compensating differential in pay.[*] Nonetheless, it is hard to argue that across-the-board salary increases should come to Michigan, where the most recent estimates by the federal Bureau of Labor Statistics place the average elementary school teacher salary (not including special education teachers) at $56,170 in 2007. National Education Association estimates place this average salary figure even higher at $58,482.[91] Graphic 9 shows the average 2007 salaries of workers in Michigan in professions that require college degrees. These figures are actual salary averages; they have not been annualized. In other words, they have not been adjusted to reflect that teachers work fewer days annually on average than many of the other professions listed below. The occupations chosen for comparison are those that require at least a four-year degree and that have workers who often earn advanced degrees. 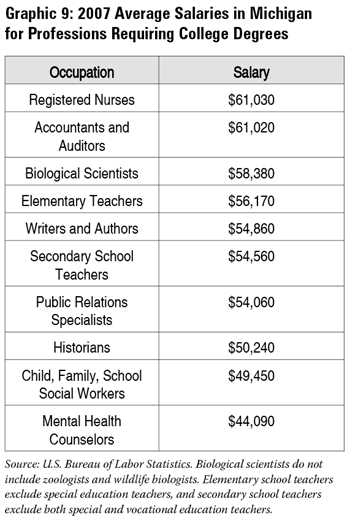 Teacher salaries are the largest single expense in education budgets, and it is true that dramatically increasing the education budget at state and local levels would enable schools to pay teachers higher salaries across the board. However, there is no reason to believe that such a reform would make teachers any more effective. As demonstrated in Part I, Michigan’s generous increases in educational spending, which have also included across-the-board salary increases for teachers, have not resulted in commensurate improvements in student achievement.

It could, however, be argued that even larger across-the-board increases would likely attract higher-quality undergraduates and more career-changers to the field. Such a strategy ignores budgetary constraints. In light of the state government’s real spending difficulties,[92] advocating large and uniform teacher pay increases to address substandard student achievement seems neither a realistic nor an efficient solution.

Policymakers should begin to consider alternatives to the norms that have traditionally guided primary and secondary public education. Rather than spending more money, the goal should be to choose the systemic reforms that are most likely to bring about improvements in student outcomes with the money available. Reapportioning the vast sums of money already set aside for public education by changing how money is spent can alter the incentives for teachers in ways that will effect positive change, and that notion should begin to guide education policymakers at state and local levels. In their discussions during education committee meetings and school board meetings, policymakers will have to address a popular alternative to market-based teacher quality reforms — class-size reductions.

[*] As discussed later, attracting teachers to hard-to-staff fields, such as upper-level math and science, may require higher salaries, too.