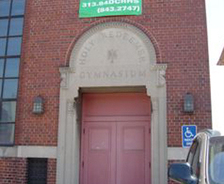 A banner marks the site of Detroit Cristo Rey High School, located at the site of the former Holy Redeemer High School in the heart of the Mexicantown community in Detroit.

When the freshman class at Detroit Cristo Rey High School gathers for the first time this fall, students will be allowed to choose their own school mascot.

Principal Susan A. Rowe wouldn’t mind if they voted for the phoenix, an "up-from-the-ashes" image that she uses herself to describe this new foray into Catholic education in Detroit.

"How many people get a chance to start a school, right from the beginning? I’m really excited. You’re bringing life to something," the longtime Catholic educator said. 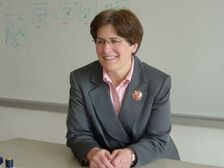 After several years of research and groundwork, Detroit Cristo Rey will open in August in the former Holy Redeemer High School in southwest Detroit, in the center of the Mexicantown community. The school will combine a college preparatory curriculum with a work-study program that essentially allows students to gain on-the-job experience while also paying for about 70 percent of their tuition. It will join 19 other high schools in the national Cristo Rey Network, which focuses exclusively on low-income students in inner cities.

Tuition costs have been cited as a factor in the closing of more than 1,000 Catholic parish schools across the country in the past two decades. The Cristo Rey model addresses that problem by requiring students to spend four days in the classroom and one full day working each week. Their earnings go toward their school costs. In Detroit, the work-study program will bring down the family contribution to an estimated $2,200 per year, according to Earl Robinson, president of Detroit Cristo Rey. The school will work to help parents who can’t afford even that much.

The Cristo Rey model not only brings costs down, but introduces students to the working world, helps them develop work ethics, assists them in making career choices and, Robinson pointed out, lets them write a resume upon graduation that includes four years of work experience and four references.

The school has signed agreements with more than two dozen businesses, nonprofit organizations and corporations in the metro Detroit area to provide jobs for students in the coming year. One of those is St. Mary Mercy Hospital in Livonia, which will place students in administration as well as in the hospital’s birthing center.

"Cristo Rey gives us an opportunity to begin to have an educational impact on children," said Ken Antczak, the hospital’s vice president of human resources and himself the graduate of a Detroit Catholic high school. Antczak also thinks the program fits well into the hospital’s mission of service to the community – dating to its founding by the Felician Sisters in 1959 – but also gives it the practical opportunity to introduce students to jobs in health care.

"Our hope is that they’re going to be looking at health care as a career option,"
Antczak said. He said he believes that the work ethics and communication skills that students learn at the worksite will carry over into their school and home lives.

St. Mary Mercy already works with other schools in a variety of work-study and joint educational programs, according to Julie Sproul, vice president of marketing and public relations. She said hospital staff members enjoy their mentoring roles.

"It’s very fulfilling to give back and to share with someone who wants to learn," she said.

On the academic side, Rowe said that Detroit Cristo Rey "will be competitive with other private Catholic schools. We will have honors and Advanced Placement courses. Our goal is not only to get them into a four-year college, but to graduate from a four-year college."

The school anticipates having Title I funding available to provide extra help to students whose reading or math skills are below grade level when they first enroll, she added.

"All of the teachers we hire are going to be able to … provide differentiated learning experiences," she said. Rowe recently completed her final year at Detroit Jesuit High School and Academy, where she has served as a teacher, dean of students and principal at varying times over the past 20 years.

Students also will take Latin and theology classes, she said, and the overall culture and curriculum of the school will reflect its local sponsors, The Basilian Fathers and the Sisters, Servants of the Immaculate Heart of Mary.

"We’re looking at developing kids who look at their lives … and reflect on how to find God in their experiences," she said.

Cristo Rey will accept a maximum of 125 students in the inaugural freshman class, then add a grade per year. So far it has received 409 inquiries and received more than 100 completed applications from throughout the metro Detroit area, according to Robinson. Cristo Rey schools are set up to accept families whose annual income is no more than about $35,000.

The school will be Detroit’s only coeducational Catholic high school, following the 2005 closings of Holy Redeemer, East Catholic and St. Martin de Porres. The school has the approval of the Catholic Archdiocese of Detroit – local approval is a Cristo Rey requirement – but will operate under an independent board of trustees.

"I think that what will happen in mid-July is, sadly, we will start turning kids away," Robinson said.

The school already has attracted attention from donors large and small. The Skillman Foundation, a major private philanthropy in Detroit, has approved a grant for $900,000 over three years. Holy Redeemer alumni and the Catholic community at large have come forward with donations of time, goods and money, Robinson said, including furniture and computers.