A Fallacious Argument Against Electricity Competition 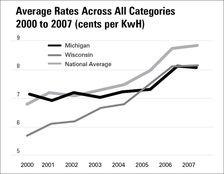 This fallacy of composition has been used recently to argue that electricity competition is a failure everywhere because of its failure in certain markets. Most would agree than the attempts to introduce electricity competition in some states, such as California and Maryland, have resulted in higher prices than would have occurred without the regulatory changes. But can we conclude from that evidence that Michigan’s introduction of electricity competition has also resulted in higher prices for Michigan customers? Unfortunately, some are attempting to make that fallacious argument while ignoring direct evidence that argues otherwise.

States that implemented retail choice electric plans were generally high-cost states, and the hope was that competition by electric suppliers would result in lower rates … but that did not happen.

The Michigan Public Service Commission sets up another variation on this fallacy by ranking states according to electricity rates and identifying them as "regulated" and "restructured" in its annual "Status of Electric Competition in Michigan" report, while ignoring the wide differences in electric restructuring efforts with widely differing results.

The APPA report correctly points out that a major cause of these increases is that many of the states with electricity restructuring forced utilities to sell generation assets, so now they are at the mercy of the wholesale market. That is a major cause of rate increases in those states. But Michigan’s restructuring did not make the same mistake — Michigan utilities were not required to divest any generating capacity. In other words, the problem the report identified is not restructuring per se, but rather that other states foolishly forced utilities to sell generation assets. The APPA report misleadingly includes Michigan with states that made that costly error.

Michigan’s electricity choice program could certainly be improved. More can be done to level the playing field between the big utilities and new suppliers. But rates in a competitive market in Michigan, for all its shortcomings, have risen more slowly than the national average, and attempts to argue otherwise can only be based on economic fallacies.

Theodore Bolema, an attorney and faculty member at the Central Michigan University College of Business Administration, is an adjunct scholar of the Mackinac Center for Public Policy, a research and educational institute headquartered in Midland, Mich. Permission to reprint in whole or in part is hereby granted, provided that the author and the Center are properly cited.