Biomonitoring is the analysis of human bodily fluids and tissues for purposes of measuring people’s exposure to chemicals. Chemicals leave “markers” in the body that can be measured. Moreover, if a compound has already been processed by the body, researchers can also measure “metabolites,” which are the byproducts of the body’s absorption and processing of chemicals. The most advanced analytical tools can precisely detect chemicals in amounts as minuscule as one part per trillion, which equates to one particle of a compound for every 999,999,999,999 other particles. Or put another way, one part per trillion is equal to a single drop of liquid in 12 million gallons. Biomonitoring can involve a variety of body fluids and tissues. Blood, urine, saliva and breast milk are most commonly tested for the presence of chemical markers, although hair, nails, semen, fat and bone also may be sampled.[1]

Biomonitoring actually dates to the 1800s, when it was used to monitor the treatment of rheumatism with salicylic acid[2] and to test factory workers for exposure to lead.[3] Until recently, biomonitoring was largely conducted in occupational settings to monitor workers’ exposure to industrial compounds.

Detecting the presence of a chemical in human tissues or body fluids does not presage illness or disease. As noted by Dr. Julie Gerberding, director of the Centers for Disease Control and Prevention: “[W]hen we measure exposure, what we’re measuring is the presence or absence of the amount of various chemicals in the blood. That does not in any way directly correlate with a particular health effect or set of health effects. ...”[4] It is also important to note that the vast majority of chemicals — both naturally occurring and synthetic — that are currently tracked in biomonitoring studies do not produce adverse health effects.[5] The “dose” received is typically far below the level at which health effects occur.

The failure to detect a chemical in body tissues or fluids does not mean that exposure has not occurred. The human body is remarkably efficient at ridding itself of foreign substances; the evidence of exposure may simply have dissipated by the time biomonitoring is conducted. Thus, an accurate interpretation of biomonitoring data requires an understanding of how chemicals are eliminated from the body.*

The health consequences, if any, of chemical exposures are determined by a variety of factors, including the toxicity of a particular compound, the actual “dose,” and the route and timing of contact (i.e., exposure).

The utility of biomonitoring thus rests on understanding for each chemical the precise relationship between various pathways of exposure, the levels of exposure and the actual effects on the body. Simply put, biomonitoring data, in and of itself, cannot reveal the health effects of exposure.

Research is underway to understand more fully the complexities of chemicals in the human body. For example, the nonprofit International Life Sciences Institute† has established a biomonitoring technical committee to standardize both the proper methodology for biomonitoring and the interpretation of biomonitoring results. The committee is composed of representatives from five universities, 11 companies and six government agencies. Additionally, researchers are investigating the interplay in the body between various chemical exposures. Collectively, these efforts can improve our understanding of health effects associated with chemicals in the environment and help determine whether regulatory controls are effective or unduly restrictive.

* The study of how the human body absorbs and eliminates chemicals is known as pharmacokinetics. 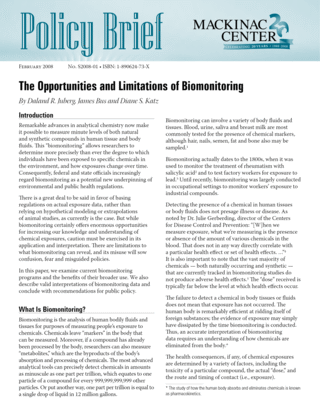