The budget deal struck by the Michigan Legislature in the wee hours of Oct. 1, 2007, represents both bad policy and bad timing. The Legislature’s limited reforms were dwarfed by tax hikes of historic dimensions — an 11.5 percent increase in the state’s income tax and a new services-related 6 percent sales tax that will make Michigan a uniquely uncompetitive location for many firms.

This projected $1.358 billion tax hike for fiscal 2007-2008 would be difficult in a robust climate, but it is much worse in a state that’s in the grip of a one-state recession. Michigan’s tax base of people and businesses is beginning to crumble, as evidenced by these sobering facts:

The extension of the sales tax to certain services is a guaranteed job-killer that will hit small businesses particularly hard. Those are the very businesses that create most of the new jobs; many of them are mobile enough to simply leave the state and escape the tax completely. For those that remain, paperwork blizzards, legal headaches and accounting nightmares await.

It should not surprise anyone that Michiganians aren’t happy. By a 2-1 margin in a poll taken before the tax hikes materialized, likely Michigan voters indicated they preferred more spending cuts than tax increases to balance the state budget. Since passage of the new taxes, 10 of the legislators who voted for them — five Democrats and five Republicans — have become targets of recall election campaigns, and a broad-based coalition of business groups may put repeal of the taxes on the ballot if the Legislature doesn’t reverse the damage.

Will higher taxes truly put the fiscal 2008 budget into the black? If people line up like sheep to be sheared, maybe. More likely, the dynamic disincentive effects of a bigger tax burden will accelerate the decline in Michigan’s ability to produce new tax revenues. The Legislature will almost certainly be grappling with yet another shortfall soon.

Legislators and the governor can do the responsible thing and repeal the tax increases. If they don’t, it is possible the people will do that for them through a ballot initiative. Either way, the issue of spending reductions and meaningful reform of state government must be revisited — the sooner the better.

The Mackinac Center for Public Policy has offered many suggestions over the years to help resolve the state’s fiscal problems. With the folly of the midnight budget deal now apparent to almost everyone, the state’s immediate need is for spending cuts and cost-saving reforms in the current fiscal year, thus eliminating the need for the tax hikes just passed.

This document recommends specific state spending reductions, clearing the way for urgently needed transformational reforms and government restructuring. The time for gimmicks, Band-Aids, distractions and punitive tax hikes is over. The moment for real remedies is long overdue.

Will the governor and Legislature muster the courage to do what’s right by undoing what’s wrong? Our state’s future hangs in the balance. 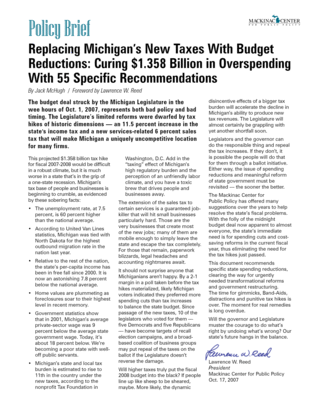