A common argument against right-to-work is that by weakening unions, right-to-work laws drive down compensation. In 2002, Wilson observed that right-to-work opponents "have often acknowledged the faster employment growth in right-to-work states, but counter that it comes at the expense of much lower wages and incomes. Organized labor’s mantra, the ‘right-to-work for less’ or the ‘right-to-starve’ has resonated strongly both inside and outside union circles."[23] This rhetorical flourish had some basis in fact: Wilson found that per-capita disposable income, essentially income after taxes, was approximately $2,850 lower in states without right-to-work laws.[24] 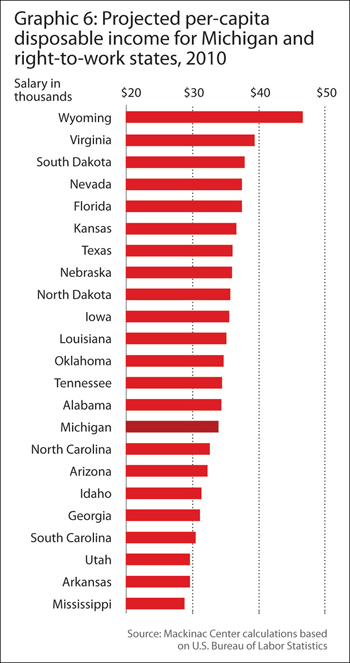 These seemingly small changes have potentially dramatic ramifications: if the trend of the last five years continues, it is simply a matter of time before right-to-work states offer not only more jobs, but better paying jobs, than Michigan. The per-capita disposable income gap between Michigan and the average right-to-work state has already declined considerably, from $2,300 in 2001 to less than $1,000 in 2006.

Looking further into the future, every right-to-work state except Georgia will overtake Michigan by 2036 if the trend of the last five years holds. This projection should be taken with a grain of salt; much can and will change between now and 2036. But the exercise does illustrate one final, important point about the gap in wages between right-to-work and non-right-to-work states: the gap is real but it is not so large that it cannot be overcome, in the lifetime of many working Michiganians, by states with the sort of advantage in economic development that right-to-work appears to offer.