While Wilson’s 2002 study did not address employment in the services sector, this is a growing area of the economy that is expected to provide the vast majority of new jobs for the foreseeable future. According to Bureau of Labor Statistics projections, 18.7 million out of 18.9 million new jobs created between 2004 and 2014 will be in the service sector.[15] If Michigan is to replace jobs lost from the retrenchment of automakers, the new jobs are far more likely to be found in services than in manufacturing. Sometimes derided as "burger-flipping," the services sector also includes well-compensated careers in health care, education, law, consulting, architecture and technology.[16] 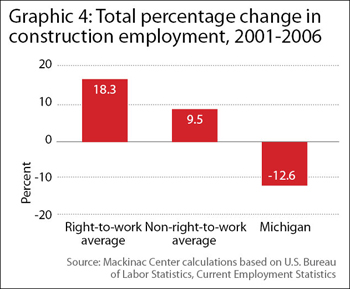 While job creation has slowed somewhat since then, right-to-work states have retained their advantage. Between 2001 and 2006, right-to work states increased service-sector payrolls by 7.5 percent, or a little more than 1.4 percent per year. That was more than half again the rate of non-right-to-work states, which on average increased service-sector employment by 4.7 percent over the five-year period, or 0.9 percent per year.[18]

Michigan’s performance, again, was among the worst in the nation; from 2001 to 2006 Michigan lost 0.6 percent of its service-sector payroll, an average annual decline of 0.1 percent.[19] Only Louisiana, struck by Hurricane Katrina in 2005, fared worse. Because service-sector jobs in particular tend to focus on interactions with customers, the effects of Hurricane Katrina and the subsequent evacuation of New Orleans are likely to be particularly acute and, consequently, Louisiana’s poor performance in creating service-sector jobs should be considered an anomaly. 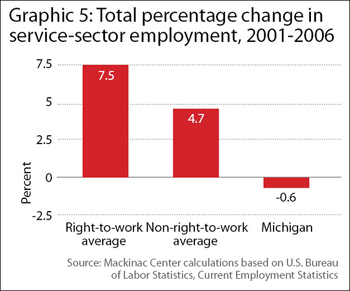