Manufacturing has long been a mainstay of the Michigan economy and an important source of employment across the country. Over the last five years Michigan has lost a large number of manufacturing jobs, especially in the automobile sector. Michigan is far from alone in this; most states saw declines in manufacturing employment between 2001 and 2006. But right-to-work states saw much less severe losses in this area. 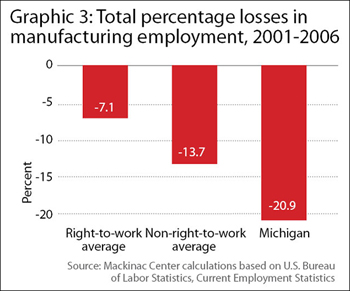