A Tribute to Hans F. Sennholz 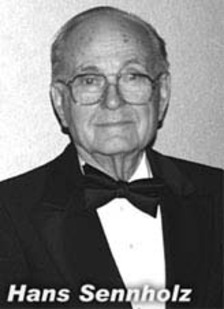 Great teachers leave lifelong impressions on the students they inspire. Their teachings become their students’ teachings, thereby spreading their influence in endless directions and across many generations. Hans F. Sennholz was such a man. The thousands who sat in his classes as well as legions of other people who knew him or knew his many works in economics and moral philosophy are saddened by his passing on June 23, 2007 at the age of 85.

Among colleagues, Dr. Sennholz will be remembered as a prolific author of both books and articles, an eloquent and uncompromising exponent of the Austrian School of Economics, and a passionate defender of the free society. He was for many years the one person who first came to mind when "Grove City College" was mentioned anywhere in the United States and abroad.

Sennholz was a memorable classroom lecturer with a distinct, theatrical delivery and a German accent that prompted both admiration and imitation. He knew how to mesmerize an audience, and no matter how large or challenging the audience was, he did more than just rise to the occasion. He transcended it with his oratorical skills. Those of us who heard him speak in many venues over the years felt he was almost always at his best, but he liked to say the size of the crowd made a difference: "If there are 10, I give a talk. If there are 25, I give a lecture. Over 100, I give a speech. To 200 or more, I give an oration."

It’s doubtful anyone ever slept in a Sennholz class, but just in case anyone ever nodded off, he warned students ahead of time how they should reply if he ever startled a sleeper with a direct question: "Just say ‘Supply and Demand!’" he told us, "and at least I won’t expel you."

His most memorable classroom lectures were the ones he gave before departing for speaking tours that took him eventually to nearly every state in the Union. Those "rehearsals" were great opportunities for students to get more of the applied economics that his public audiences heard — from commodity speculation and real estate investment to deficit spending and monetary inflation. At the heart of every Sennholz presentation was a clarion call for personal responsibility, individual liberty and limited government.

Once, Dr. Sennholz held forth for 45 minutes with a ringing defense of free labor markets and a brilliant assault on compulsory unionism. With five minutes left in the class, a student — obviously not an economics major — raised his hand to ask a question. "Dr. Sennholz, what you say sounds appealing but the fact is, not many people think that way. So there’s got to be something wrong with what you’re saying."

One hundred students sat stone-faced and silent. Then came the response — gentle but firm, and forever quotable. "Truth," said Hans, "is not a numbers game. You can be alone and you can be right." Then a pause and the grand finale, "I may be alone, but I am right."

And of course he was. And he was also right about a lot of other things that at the time weren’t widely accepted as so. He was right about the big picture, the most paramount question of our age: Should economies be led by central planners or by the sovereign choices and decisions of free individuals? There was never a shred of doubt where Hans stood on that, and one of his greatest contributions as a teacher was to instill in his students a similar certitude on that question.

Perhaps the greatest tribute to a teacher is what his students later do because of what he taught them. In this regard, Dr. Sennholz leaves a vast and enduring legacy. In all walks of life, thousands of Sennholz students are spreading the good word about liberty and free markets. Many are doing it from prominent platforms as economists, educators, philanthropists, pastors and political leaders, and all of us have endless and wonderful memories of how inspired we were by the gold-plated tongue of our illustrious mentor.

Hans always urged his econ majors to put their freedom philosophy to work in the teaching profession. He was fond of telling us that teachers don’t typically get rich, but they can leave behind a better world. He used to say that we would have to choose between great wealth and immortality. We don’t know about his wealth, though we strongly suspect he and his beloved wife Mary did just fine in that department. But as to immortality, Hans Sennholz has it by the boatload.

Hans F. Sennholz will be remembered for a very long time as a very great teacher of very essential economic and moral truths. We loved him, and we will miss him.

Lawrence W. Reed is president of the Mackinac Center for Public Policy, a research and educational institute headquartered in Midland, Mich. George H. Pearson is a trustee of the Flint Hills Center for Public Policy in Wichita, Kansas. Both authors are former students of Dr. Sennholz and graduates of Grove City College in Pennsylvania where Dr. Sennholz chaired the Economics Department for many years. Pearson graduated in 1964 and Reed in 1975. See www.sennholz.com and www.gcc.edu for more about Dr. Sennholz. Permission to reprint in whole or in part is hereby granted, provided that the author and the Center are properly cited.