The first page of the Dec. 20, 2006, state aid financial status report for the Grand Rapids City School District is shown nearby (see Graphic 23). The report is actually two pages long, but the second page contains mostly summary and prior-year adjustment data and alternative breakdowns of some of the monies listed on Page One of the SAFSR.

The top right-hand side of Page One details the number of general and special education pupils (in FTEs) in the Grand Rapids district,[ccv] as well as the district’s special education costs, including transportation-related expenses. On the left is a text box showing the amount of the district’s fiscal 2007 foundation allowance. Below that figure is the line “20(19) Foundation Adjustment,” followed by the numbers 159.00 and 3,348.131 (for more on this foundation adjustment, see “Former ‘Section 32e’ Money,” under "The Foundation Allowance: General Education cont..."). Multiplying $159 (the financial adjustment) times the state aid membership of 21,057.43 (upper right) and rounding to the nearest dollar yields the $3,348,131 in additional revenue shown in the box.

The rest of the report details the district’s income by category and is discussed below. For each category, the amount sent on Dec. 20 is shown under “Current Amt” (“current amount”) in the right-hand column, while the total amount the district expects throughout the fiscal year appears under “Amount,” the left-most column following the “Current Year Allowances” category. [ccvi]

While the categories shown in the state aid financial status report do differ from district to district, many of the categories listed in the Grand Rapids report would be found in other districts’ SAFSRs. The following is a brief explanation of each of these categories, recognizing that most of them are described in greater detail under the “Appropriations” section of the primer. 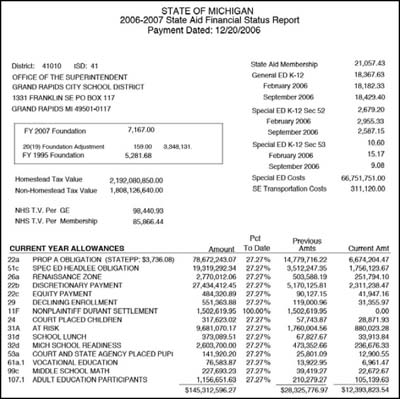 [ccv] Note that the counts are given for both February and September, reflecting the September pupil membership count day and February supplemental count day (see “Pupil Counts”).

[ccvi] The “Previous Amts” indicates the money the district has received during the fiscal year so far. The sum of the previous amount and the current amount divided by the total amount expected (“Amount”) yields in percentage terms the “Pct To Date” (“percent to date”).