The final key source of funds is local government monies spent on county/city roads. Based on Act 51 reports to MDOT, local governments raised and spent $384.7 million on local owned roads in 2005. Figure 11 summarizes a very rough estimate of the local sources of money for this spending. These estimates are based on the Act 51 reports and the use of some information from FHWA Highway Statistics 2004 to develop a basis for rough estimates of the source of funds in prior years. Of the various sources, property taxes are the only figure which is thought to be fairly accurate. We estimate property taxes totaled $38.7 million and represented about 10.1 percent of local source revenue for local roads. The figures for other sources of funds are very rough estimates based on prior Highway Statistics and Act 51 data. General appropriations were estimated to be the primary source of local funding, accounting for $176.0 million, or 45.7 percent of the total. Bond proceeds were another major source and estimated to be $100 million, with miscellaneous revenue estimated at $70.0 million. However, the above figures on the source of funds should be considered very rough estimates. 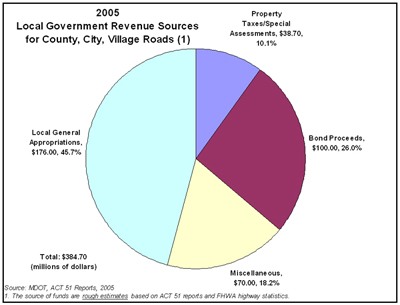