Bond and note issues are used to augment tax and registration fee monies. In recent years they have been critical to maintaining funding levels for the highway and bridge program on the state trunkline system. In 2006 bond and note issues were also used for the “Jobs Today” program to help provide funding for local governments to use in match money for federal funds. Bond proceeds are not routed through the MTF and their values are over and above amounts reported for the MTF. Each bond program is accounted for in a separate Surface Transportation or Comprehensive Transportation Program Bond Proceeds Account. 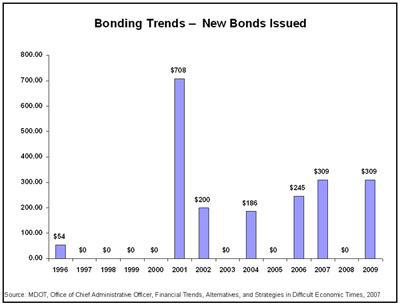