Michigan auto and commercial use truck registration fees generated $863.4 million for the MTF in FY2005. While additional registration fees were actually collected, a significant portion were diverted to the TACF for paying the Secretary of State (SOS) for collection costs, rather than first being deposited in the MTF for later transfer to the SOS as had been prior practice. Registration fees for autos have been based on the value of the car since 1983. Autos are taxed approximately 0.5 percent of the list price (regardless of what the consumer actually pays for the car) of the vehicle with the exact tax depending on whether the car has a list price above or below $30,000. Registration fees are 90 percent of the prior year for the second, third and fourth year of registration, and then are level from that point forward. The average auto registration today is about $100.

Commercial use vehicle registration fees are based on weight and were last increased in 1997 when they went up about 30 percent. The average registration fee on a Michigan 5-axle tractor trailer combination truck is $1,699, which ranks 22nd among the states.[27]

While registration fees have held their purchasing power fairly well since they are primarily tied to the price of a car, as compared to fuel taxes, total registration revenues have been negatively impacted in recent years by falling auto sales in Michigan. Figure 9 shows registration fee absolute dollars and growth rates since 1998. Revenues grew by about 5 percent per year through 2004, somewhat blunting the loss of purchasing power from the fixed price fuel tax. They dropped in 2005 due to a change in the lifetime trailer registration fee, have been flat for 2006, and are forecast to stay flat through 2008. 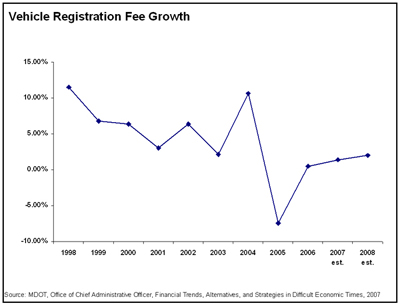