The state gasoline tax is 19 cents per gallon and is a fixed amount per gallon regardless of the price of gasoline. This tax was last raised in 1997 when it was increased from 15 cents per gallon. Prior to that the gasoline tax was last raised in 1984. Each penny of state gasoline tax raised $48.5 million in 2005. However, as can be seen in Figure 7, the total amount of money raised from the gasoline tax has been very flat to even negative in recent years due to the increased conservation resulting from high gasoline prices. For instance, in FY2002 the tax raised $938.9 million for the MTF, but has declined each year since then to just $906.2 million in 2006. This is a 3.5 percent decrease in actual gasoline tax dollars. The revenue declined by $16.2 million (1.8 percent) in FY2006 alone. Long term there will also be a small negative impact to MTF revenues resulting from a 2006 Act which will decrease the tax rate for E85 gasohol fuel from 19 cents to 12 cents per gallon.[19] 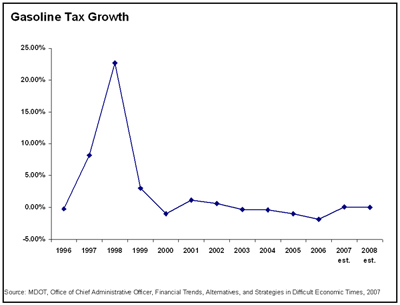 Because the gasoline and diesel fuel taxes that go into the MTF are not tied to the price of fuel, and are instead a fixed amount per gallon, they are not protected from the impact of inflation on the purchasing power of each dollar raised. This lack of indexing to the constantly inflated price of gasoline and diesel results in constant nominal revenue, while highway construction costs are constantly going up. Figure 8 shows the impact of inflation on the purchasing power of our gasoline taxes over recent years. Michigan gasoline tax revenues have lost 42 percent of their purchasing power since they were last raised in 1997. The 19 cent per gallon tax passed in 1997 now has the purchasing power of just 11 cents per gallon using the federal highway construction index as the deflator.[21] If the Detroit CPI is used as the deflator, which has seen far less inflation than has been the case in highway construction costs, the gas tax has still dropped from 19 to 15 cents per gallon in purchasing power. Diesel taxes have lost similar amounts of purchasing power since 1997. Other Michigan taxes, such as the property tax, income tax, sales tax, former single business tax, and the proposed services excise tax, are all in effect indexed because they are tied to the inflating value of goods, services and property values. Some states, such as Wisconsin, and even Michigan in the early 1980s, have also indexed their fuel excise taxes to inflation to maintain the value of highway funding. 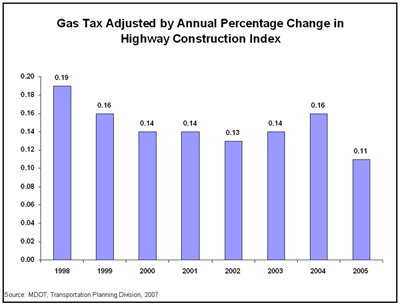 Purchasers of Michigan gasoline, and truckers using Michigan roads and buying diesel, also pay sales or use taxes on Michigan gasoline and diesel. The sales/use tax is 6 percent on the base price of the fuel, excluding the state fuel excise taxes described above, but including the federal excise tax in the base. The sales/use tax, however, does not go into the MTF, but instead is used to fund K-12 education and other general fund needs. Of the total 6 percent, 4 percent is constitutionally dedicated to the School Aid Fund.

Table 3 compares Michigan’s current fuel and sales/use tax rates to those in neighboring states and to the national average.[22] The fuel tax rate is for the excise tax only for gasoline, and in the case of diesel for motor carriers specifically. The add-on column includes sales taxes. For gasoline, Michigan fuel taxes alone rank 31st nationally, with Ohio and Wisconsin considerably higher. The 19 cent rate is below the national and neighboring state averages. However, seven states, including Michigan, add sales tax to the price of gasoline. It is also important to note that nine other states also have local sales taxes that are added to the price of gasoline (including Illinois), while Michigan does not allow such local sales taxes on gasoline. After adding in state sales taxes, Michigan ranks second nationally, and with maximum local sales taxes added, Michigan ranks fourth nationally in the size of the total gasoline excise and sales taxes per gallon levied. While the excise fuel tax goes to the MTF road fund, the sales tax does not fund roads in any way. 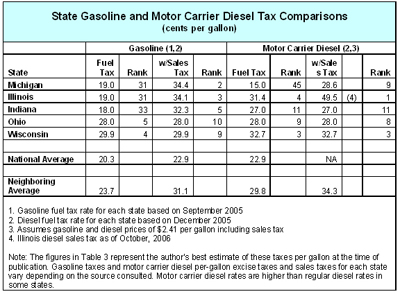 Based on the Treasury information, the motor carrier diesel tax rate in Michigan ranks 45th in the country before sales/use taxes. Our 15-cent-per-gallon rate compares to a national average of 22.9 cents, and a neighboring state average of 29.8 cents. After sales/use tax is included, Michigan ranks 9th, with a rate of 28.6 cents per gallon (assuming a fuel price of $2.41 per gallon), with the average of the neighboring states at 34.3 cents per gallon. This assumes an Illinois rate of 49.5 cents per gallon including all state and local sales taxes.[24] Given the varying information on diesel taxes, especially including sales taxes, the above information should be used with some caution.

When looking overall at the gasoline and diesel fuel taxes used to support the MTF, Michigan ranks quite low in the level of taxation.[25] In 2003, Michigan’s per person motor fuel tax rates averaged $107 per person, or 42nd nationally. Michigan also ranked 42nd when looking at these taxes as a percent of personal income.