The Michigan Constitution provides strong guidance on how highway user taxes should be spent. The document requires that taxes and fees collected on items used “for the operation of a motor vehicle on the state highways,” including fuel and registration taxes but with the exception of general sales taxes, are to “be used exclusively for ‘transportation’ purposes.” At least 90 percent of these taxes must be spent on the planning, designing, and construction of roads and bridges designed primarily for the use of motor vehicles using tires.

Additional detailed guidance on how state transportation revenues should be spent is contained in Public Act 51 of 1951 (MCL 247.667), as amended. Under the act a number of funds and sub-funds are established to receive and distribute money to the state, county, city and village roads in Michigan.[7] The Michigan Transportation Fund (MTF) is the most important of these funds, with state highway user tax receipts deposited into the fund. Figure 5 depicts the various MTF transfers and amounts to sub-funds for 2005. In addition, proceeds from various bond offerings are received into special Bond Proceed Funds for distribution to approved projects. The money in the MTF is allocated to other sub-funds and distributed to state, county, city and village owners of the roads based on formulas specified in Act 51. Generally, Act 51 requires that revenues first be spent to pay administrative costs, collection costs, and principal and interest on bonded indebtedness. 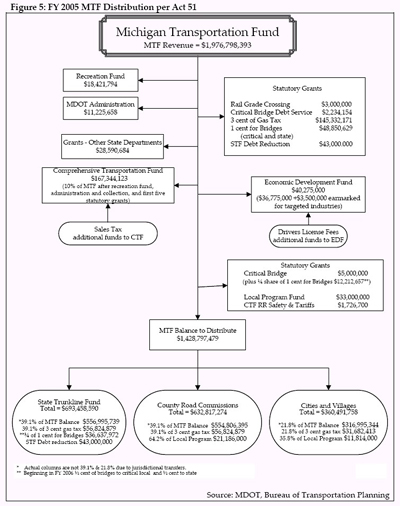 For a number of years monies were transferred from the MTF, via interdepartmental grants (IDG’s), to pay for the Secretary of State’s (SOS)costs of collecting registration fees, and to pay for a variety of other services to MDOT. In FY 1997 $95.6 million was appropriated from the MTF to other state departments. However, in 1997 PA 111 provided an additional $43 million of general fund funding for the SOS, thereby allowing for an offsetting reduction in MTF funding of the SOS.[8] With the aid of the extra General Fund monies, the MTF contributions to the other state departments were cut to $54.1 million in FY 1998, and they were below $60.2 million for each of FY’s 1999, 2000, and 2001.[9] However, in order to close a FY 2002 General Fund deficit, an Executive Order was used to transfer an additional $40 million of MTF money to the SOS, with offsetting reductions in General Fund contributions to the SOS.[10] This raised the MTF contribution to SOS specifically, from $55.8 million to $95.8 million for FY 2002.

Then, in 2003, an important legislative change was made that masks the true level of transfers to the SOS for “collection services.” In 2003, a new fund called the Transportation Administration Collection Fund (TACF) was created. Registration fees and various other license fees that had been previously placed into the MTF were placed instead into the TACF and transferred to the SOS.[11] Transfers from the MTF to the SOS were reduced since the fees were no longer being deposited into the MTF. In FY 2005 approximately $68.4 million of previous MTF money was being transferred to the SOS. In FY 2006 this was closer to $78 million (although total appropriations for the TACF were at $118 million including some $40 million of “lookup fees” that are unrelated to registration fees and which would never have gone to the MTF). However in addition to the TACF money, in FY 2006, $20 million of MTF revenue was also transferred to the SOS.

So in total some $98 million of former and current MTF revenues was still going to SOS for collection expenses in FY 2006. This change made the loss of “collection fees” from the MTF less visible since the money was never deposited into the MTF to begin with and then transferred out in a visible way as had been the previous practice. The net result of these changes is that the MTF is being reduced by some $98 million per year to cover SOS collection expenses, thereby reducing the need for General Fund contributions to the SOS.

The MTF has also been used to pay for the services of a number of other state agencies. In 2005 some $43.4 million was transferred from the MTF via interdepartmental grants (IDGs) to other state departments, including SOS, for “collection expenses” and for various other services.[12] An additional $31.1 million of MTF monies were appropriated for Information Services and the MEDC in FY 2005. MDOT also contracted for a variety of other services from state departments, at a cost of $70.1 million in 2005. The grants were for services provided to MDOT, such as for State Police, Civil Service, etc., and for the noted collection expenses. While these are reasonable service charges in most cases, they still reduce the amount of money available for road investment.

Once the funds (minus SOS administrative costs) are actually placed in the MTF and the above costs and transfers have been paid out, the remaining balances are then allocated to a number of special funds, such as the Critical Bridge Fund, the Recreation Fund, the Rail Grade Crossing Account and the Transportation Economic Development Fund. After allocation of money to five statutory grant accounts — including rail grade crossings, critical bridge debt service, revenues from the 4-cent-per-gallon 1997 gas tax increase, and State Trunkline Fund (STF) debt reduction — 10 percent of remaining funds are deposited to the Comprehensive Transportation Fund. The MTF balance, after these transfers, and other transfers to a Critical Bridge Fund and Local Program Fund, is then distributed to the state road STF, county road commissions, and cities and villages. The state STF roads get 39.1 percent of the MTF balance including the revenues from 3 cents per gallon of the 1997 4 cent per gallon gasoline tax increase. STF bridges also get the revenues from one-half of 1 cent per gallon of the 1997 tax increase. County road commissions also get 39.1 percent of the MTF balance, including the same percentage of the 3 cent per gallon increase, and 62.2 percent of the Local Program Fund. Cities and villages get 21.8 percent of the 3 cent per gallon revenues and remaining MTF fund balances, and also get 35.8 percent of the Local Program Fund.

It is important to note that the 4 cent per gallon gasoline tax increase in 1997 was dedicated specifically to roads and bridges. Revenues from the tax were not to be spent on the Comprehensive Transportation Fund (CTF) which is primarily used for mass transit. In supporting the increase, Gov. John Engler argued that this was a tax on road users, and that he was selling the program to the public on the basis that the money would be used for roads, and that therefore, the money should only go for roads and bridges. That is why revenues from the 4 cents were placed into a “statutory grant” account and distributed to roads and bridges and not left in the general MTF balances where 10 percent would be distributed to the CTF.

It is also important to note that Act 51 specifies how money will be distributed geographically across the state. First, 83 county road commissions pick their “county primary,” and “county local” roads. The county money is then distributed to county primary and local roads around the state based primarily on the county population, route miles and number of vehicles registered in the county. A similar system is used for distributing money to some 533 city and village local road agencies. First, cities categorize their streets into “major street,” and “local street” systems. Some 75 percent of the state money going to cities is reserved for major streets and debt service, with about 25 percent reserved for local streets. Money is then allocated to these systems by city on the basis of the city’s population and route miles in each category. As noted earlier in the report, this county/city system for distributing money focuses primarily on population and route miles. The system does not take into account factors such as vehicle miles of travel, congestion levels, road condition or other factors that better address the level of need for funding.