Figure 1 depicts how Michigan’s transportation funds are spent by source. This figure includes all federal highway, mass transit and air funds, Michigan MTF funds, and local road only funds. In 2005 Michigan spent $3.89 billion on transportation from all sources of state/federal funding, plus local road funding. About $3.43 billion of that total was spent on roads, MDOT administration, and overall debt service. An additional $461.2 million of federal/state money was spent on airports, bus, marine and rail – with most of that being restricted federal money. 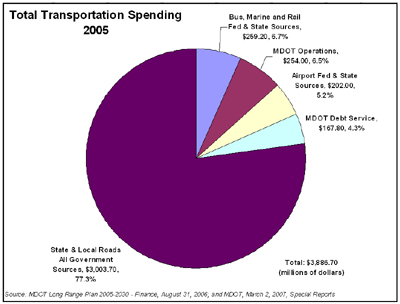 The State Trunkline Fund roads, owned by the state, received a total of $1,791.2 million in funding in 2005. Figure 2 summarizes the source of this funding. About half of these funds, 52.2 percent, came from state sources. An additional 45.0 percent came from federal funds. A small amount of funding for state roads was provided through transfers from local governments. 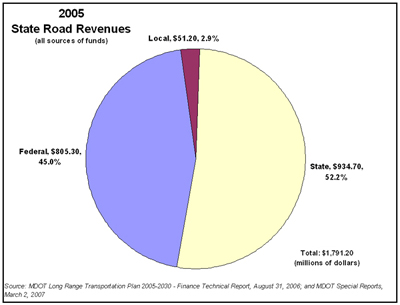 Local county/city and village roads received a total of $1,475.1 million in 2005 funding as shown in Figure 3. These figures are based on Act 51 reports provided to MDOT from local units of government. The FHWA Highway Statistics report on Michigan numbers shows larger dollar amounts of locally raised money. However, they may include the $245 million that MDOT sends to locals for contractual work on the state road system and that should not be counted. The Act 51 reports to MDOT should be the most accurate report on local raised funds for local roads and those numbers are used here. However, this makes it somewhat more difficult to compare to other states. 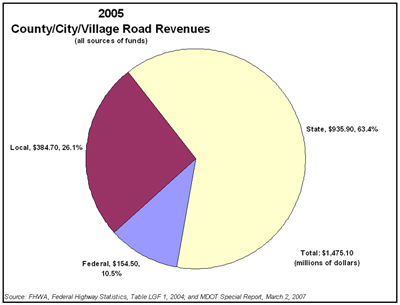 The largest source of funding for local roads was from state fuel taxes and registration fees, with $935.9 million transferred to locals, or about 63.4 percent of their total local spending. Figure 3 depicts these fund source amounts and percentages. These state transfers of $935.9 million are greater than the $934.7 million spent by the state on state roads. The other major source of funding for local roads is local governments, which provided $384.7 million in 2005, or 26.1 percent of the total, based on Act 51 reports to MDOT. The third source of funding for locals is the federal government. Michigan, unlike many states, passes on to locals a relatively large share of federal funds. In 2005, a total of $154.5 million of federal funding was dedicated to county/city roads.

The relatively large transfer of state funds to locals is unusual when compared to other state practices, and may be a factor in the low level of state spending for key state owned high volume economic development oriented roads. For instance, while Michigan transfers to locals represent 63.4 percent of their spending on local roads, the national average is for state transfers to represent just 20.1 percent of local receipts. In total absolute dollars, Michigan ranked number two out of 50 states for the amount transferred to locals, with just California transferring more.[6] Conversely, local governments in Michigan raise a relatively small part of the total dollars they spend on their own local roads. Using the Act 51 reports, they raised $384.7 million in 2005.