While little known to the general public, Michigan roads are owned, managed and maintained by one of three levels of state government, and are classified into various systems based on their travel characteristics. See Table 1 for a summary of road ownership by type of road, and annual vehicle miles of travel (AVMT) by road type. These ownership designations and functional classifications are very important to understand in that past, current and potential future road funding decisions are likely to be impacted by issues related to road ownership. 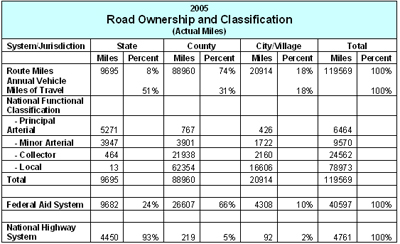 Given the above system of county and municipal roads, the Michigan DOT controls a relatively small percent of total route miles as compared to the national average and neighboring states. For instance, nationally the average percent of roads controlled by the state is 19.5 percent, while in neighboring states the average is 12.4 percent.[3] In Ohio, 15.5 percent of the roads are controlled by the state. This is an important piece of information because as compared to neighboring states Michigan state officials are somewhat limited in their ability to directly control many key roads. While the difference between controlling 8 percent and 12.4 percent of route miles may seem fairly small, it is important to note that a disproportionate share of total vehicle miles traveled moves on that incremental percent of road route miles.

The number of miles of roads assigned as state versus county versus city, and the Michigan formula for distributing state transportation revenues to specific local governments (the geographic formula) has been relatively static for many decades. However, in 1997, as part of the proposed Build Michigan II proposal that raised the gasoline tax 4 cents per gallon, Gov. John Engler’s administration proposed a major reclassification of the roads that would have increased the percentage of state roads.[4]

At the time the administration argued that, given population changes and economic development over many years, it was necessary to put more roads under state control so that the governor could ensure that the most important roads were expanded and maintained. The proposal also called for changing the distribution formulas so as to reduce the impact of simple route miles and population in determining allocations to specific counties and cities. New factors such as road usage and condition would have been introduced in an attempt to distribute money to areas with the most growth and traffic volume. However, these elements of the Engler proposal for road funding were not adopted by the Legislature and road jurisdiction and geographic formulas have not been changed significantly in a half century.

Another classification system is the National Highway System (NHS), consisting of those roads that have the greatest state, regional and national significance to the country. The NHS routes were selected almost exclusively from roads classified as principal arterial or higher, with all interstate (I) miles included automatically. Some additional roads that serve major intermodal terminals and military installations are also included. In Michigan, some 4,761 miles are in the NHS, with 93 percent of the system consisting of state owned roads.