1 The term "Baby Bells" refers to the seven regional telephone companies created when AT&T agreed to divest itself of local calling services following allegations of antitrust by the U.S. Department of Justice.

5 HBO program signals are beamed to a satellite in stationary orbit more than 22,000 miles above the Equator. The satellite bounces the signals back to terrestrial receivers throughout North America.

7 Federal Communications Commission, "Annual Assessment of the Status of Competition in the Market for the Delivery of Video Programming, 12th Annual Report, March 3, 2006.

13 Austan Goolsbee and Amil Petrin, "The Consumer Gains from Direct Broadcast Competition with Cable TV," May 29, 2001.

18 Federal Communications Commission, "Eleventh Annual Report, In the Matter of: Annual Assessment of the Status of Competition in the Market for the Delivery of Video Programming," Feb. 4, 2005.

23 Fiber optics refers to the transmission of information as light pulses along a glass or plastic wire. Transmitters convert electrical impulses from a computer into light streams. The use of optical fiber eliminates the electromagnetic interference commonly experienced with copper cables.

24 DSL technology enables data to be transmitted at high speeds through the copper-wire telephone network. A "transceiver" linked to a personal computer connects to the network of an Internet Service Provider through the local telephone network. Data is compressed into digital packets and routed by the Internet Service Provider to the World Wide Web.

31 T.W. Hazlett and G.S. Ford, "The Fallacy of Regulatory Symmetry: An Economic Analysis of the ‘Level Playing Field’ in Cable TV Franchising Statutes," Business and Politics, Vol. 3, No. 1, 2001.

33 The Perryman Group, "An Assessment of the Impact of Competition in the Delivery of Wireline Video Services on Business Activity in Texas," July 2005.

34 Each market pair contained a community with a broadband service provider and one without. The market pairs were chosen based on their similarities in terms of size and demographics. 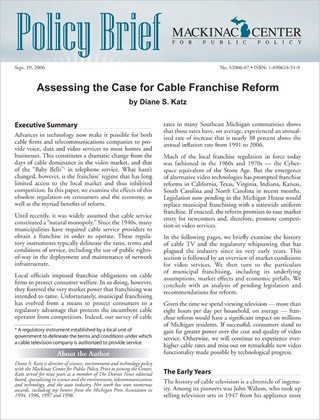