The State of the Great Lakes 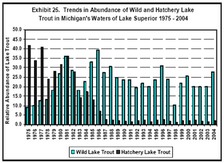 (Note: Following is an extension of testimony submitted by Diane S. Katz, Mackinac Center director of science, environment and technology policy, to the U.S. Senate Committee on Environment and Public Works. On March 16, Katz testified before the committee during a hearing on the Great Lakes Regional Collaboration Strategy to Restore and Protect the Great Lakes. Later, committee senators asked Katz to respond to these follow-up questions.) 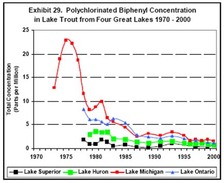 1. Mr. Andy Buchsbaum expressed disagreement with your characterization of the health of the Great Lakes. How do you respond to his criticisms of your statement and what do you believe to be the current state of the Great Lakes?

The question posed by Sen. Jeffords to Mr. Buchsbaum was based on a faulty premise. As the hearing transcript shows, the senator asked Mr. Buchsbaum to explain "the difference between the scientific assessment of the Great Lakes with the view presented by Ms. Katz." In so doing, Senator Jeffords erroneously insinuated that my testimony lacked scientific merit as compared to the opinions offered by Mr. Buchsbaum. That is not the case, as the data below affirms.

Mr. Buchsbaum did not rebut my testimony directly. In fact, he concurred with my overall assessment that water quality has improved, stating: "(A)s Ms. Katz said, water quality is better, there are some indicators that have gone up, some of the Government reports are somewhat favorable."

I hold that Great Lakes water quality has improved overall. Indeed, the U.S. Environmental Protection Agency, which is not prone to optimism, has concluded that, "The Great Lakes have improved tremendously."[1] That is not to say there aren’t ecological challenges to overcome. The infiltration of non-native species, for example, is a legitimate concern. But in the absence of basin-wide monitoring and coordinated research, it is difficult to determine the extent of the problem or the most beneficial course of action.

The following facts informed my testimony about the state of the Great Lakes:

1. On what scientific documents and peer reviewed studies do you base your assessment of the state of the Great Lakes ecosystem and the level of risk posed to that ecosystem should restoration actions not be taken?

My most recent assessment of the state of the Great Lakes is based on the documents and studies listed below, as well as dozens of other studies and research documents that I have read and critiqued in the course of my 15 years of researching and reporting on the Great Lakes. Most of my sources are the very regulatory agencies that would assume additional authority and funding should Congress approve the collaboration strategy the senator advocates.

I did not suggest in my testimony — nor do I believe — that restoration actions should not be taken. Therefore, I have no documents or studies to cite for such a conclusion. Finding fault with the Great Lakes Regional Collaboration Strategy does not mean that I oppose restoration actions. On the contrary, my testimony includes six specific recommendations to improve stewardship of the Great Lakes.

1. What are your thoughts on S. 208? How would you envision a program to monitor the Lakes?

I regard S. 208 as a well-intended but flawed attempt to improve monitoring of Great Lakes water quality.

Since our 1988 report on EPA’s management, GAO has stressed numerous times that EPA place priority on developing indicators to guide the agency’s priority setting, strategic planning, and resource allocation…EPA has not initiated or planned an institutional framework with clear lines of responsibility and accountability for developing and using environmental indicators, and no processes, procedures, or work plans exist to link the results of the initiative with EPA’s strategic planning and performance reporting cycle.

Moreover, as the GAO stated in a 2004 report, the EPA and its Great Lakes National Program Office (GLNPO) have also failed to lead and coordinate Great Lakes restoration efforts. "This role has never been completely filled by GLNPO because it has not fully exercised its coordination authority," the GAO concluded. "Other organizations have attempted to fill the void."

S. 208 is also problematic because it employs only vague language in dictating the type of indicators and monitoring to be developed by the EPA, i.e. "a set of science-based indicators of water quality and related environmental factors." Such statutory generalities grant too great a degree of discretion to a regulatory agency with a long and troubled history of "mission creep." An explicit statement of monitoring priorities is needed to ensure that legitimate policy goals are achieved.

The authorizations outlined in S. 208 are excessive, particularly in light of the lack of accounting for the billions of dollars appropriated to numerous Great Lakes programs over the past three decades. Funding for the development of indicators and basin-wide monitoring should be generated by eliminating existing programs that cannot document environmental improvements commensurate with costs.

Developing a set of credible and relevant indicators is no easy task. I recommend that Congress first demand an accounting of existing indicator sets and monitoring activities before launching a new initiative. And given the technical and political pitfalls of developing a new monitoring regime, private researchers would be preferable to government bureaucrats who have already failed to fulfill their responsibilities for monitoring restoration progress.

Diane S. Katz is director of science, environment and technology policy at the Mackinac Center for Public Policy, a research and educational institute headquartered in Midland, Mich. Permission to reprint in whole or in part is hereby granted, provided that the author and the Center are properly cited.