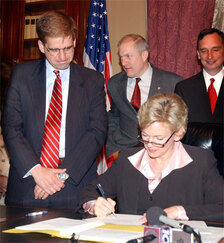 Gov. Granholm signs legislation authorizing targeted tax breaks for Federal Mogul. Her press release said the bill "Adds muscle to Michigan's economic development arsenal," and quotes the Michigan Economic Development Authority director as saying, "I fully expect that these changes will save thousands of jobs for Michigan’s families.” On April 11, 2006, the firm announced it will close its St. Johns plant, eliminating 420 jobs.

What will make legislators finally accept that the targeted tax incentive binge they’ve been on won’t fix Michigan’s broken economy? What will it take before they realize that only such things as broad-based tax cuts and regulatory reform will do the job?

The announced closing of a Federal Mogul plant in St. Johns, with a loss of 420 jobs, may be a good candidate.

The binge has been bipartisan: Gov. Jennifer Granholm boasts that she has signed into law "53 tax cuts" passed by a Republican legislature — but none of these are actual broad-based reductions of individual or business tax rates. Almost all are narrow tax breaks targeted at particular firms, industries or locations.

"The governor said 'From today onward we will better be able to address the challenges employers face in the fast-changing 21st century economy, and retain more jobs for Michigan families.'"

At least three of those 53 "tax cuts" (Public Act 79, Public Act 80 and Public Act 81) were deliberately tailored to benefit Federal Mogul. When Gov. Granholm signed this legislation in April 2004, she issued a press release claiming that it "adds muscle to Michigan’s economic development arsenal." The governor said, "From today onward we will better be able to address the challenges employers face in the fast-changing 21st century economy, and retain more jobs for Michigan families."

Republican legislators echoed the governor’s sentiments. Sen. Alan Cropsey, R-DeWitt, said, "For Michigan’s economy to work, Michigan’s people need to work. The fight for jobs at Federal Mogul is a fight we need to win — for all of Michigan."

Rep. Bill Huizenga, R-Zeeland, said: "This new law makes it crystal clear that we will do whatever we can to help employees and manufacturers that have been hard hit by today’s difficult economic conditions."

Sen. Jason Allen, R-Traverse City, said, "I’m glad to see that the governor agrees with me and my Republican colleagues."

Rep. Jerry Kooiman, R-Grand Rapids, said: "Passage of Senate Bill 824 sends a strong message to Federal Mogul and other companies that the Legislature is serious about removing barriers that get in the way of Michigan being a friendly business and manufacturing state."

Unfortunately he was wrong, as were the other 106 representatives and 38 senators who voted for the bill. This legislation, and scores of similar bills the Legislature has and continues to churn out, sent just the opposite message. Instead of getting "serious about removing barriers" to all, Lansing has made it clear it’s only willing to lower them for a few. Kooiman and his colleagues may have been well-intentioned, but the "arsenal" they’ve created is loaded with duds.

For years, the Mackinac Center for Public Policy has consistently presented theoretical and empirical evidence as to why this approach will not work. April 18 marks the 11th anniversary of the MEGA program, the state’s premier targeted tax incentive tool. One year ago this week, the Mackinac Center released the results of its rigorous econometric analysis of the MEGA program. The study found that since MEGA’s creation, the program had no impact on employment, the employment rate or per-capita personal income. Michigan counties with MEGA firms fared no better than those without. For every $123,000 in MEGA tax incentives offered, only one construction job was created — and those jobs lasted less than two years.

While legislators and the governor chase particular firms with targeted tax breaks, thousands of potential new business start-ups are stillborn as a result of a punishing tax, regulatory and labor climate. These losses are the "unseen" cost of government trying to pick winners and losers, rather than doing the harder but more fruitful work of making Michigan a state that is attractive to all employers — not just those with clout in Lansing.

Here’s the real lesson from Federal Mogul, Delphi, Tower Automotive, Kmart, Dana Corp., Hayes Lemmerz and all the other "winners" selected by Michigan’s economic development apparatus: Since 2003, the U.S. economy has added more than 4.7 million non-farm payroll jobs, mostly in small businesses providing products and services that no government official infected by the "fatal conceit" of central planning could possibly have predicted. These firms don’t benefit from targeted tax breaks — they pay for them.

Imagine how different things might look today if, instead of handing out narrow "incentives" to high-profile firms or politically "sexy" industries, the state’s bipartisan political establishment had eliminated the deadly tax, regulatory and labor law obstacles that inhibit job growth here, especially in small business start-ups.

Had they done so, nothing would have prevented Michigan from netting its share of those 4.7 million new jobs. Home prices would be rising, rather than stagnant or falling. Young people wouldn’t have to leave the state to find jobs. Personal income wouldn’t be falling to historic lows relative to the rest of the nation. And the loss of 420 jobs at Federal Mogul would be an unfortunate footnote in an otherwise booming state economy, rather than yet more evidence of a failed policy.

Michael D. LaFaive is director of the Morey Fiscal Policy Initiative at the Mackinac Center for Public Policy, a research and educational institute headquartered in Midland, Mich. Jack McHugh is a legislative analyst for the Mackinac Center. Permission to reprint in whole or in part is hereby granted, provided that the author and the Center are properly cited.