States are suffering from their worst budget problems since the Great Depression. Thirty-one states accumulated a $31 billion deficit in 1991 alone. This follows on the heels of several years of budget distress in state capitals across the country. In 1990, spending exceeded revenues in two-thirds of the states while, in the Northeast, the first signs of fiscal trouble appeared back in 1988.

According to a number of state budget analysts, states will have to grapple with structural budget deficits throughout the 1990s. For instance, Steven Gold, director of the Center for the Study of the States, forecasts that in the 1990s, "It's virtually inevitable... The states will face continuing fiscal stress."[2]

Analysts cite several causes for the states' fiscal problems. These include:

The most important impetus for the budget problems of the 1990s, however, is that states can no longer afford to fund the rapid growth of state spending that occurred in the 1980s. Between 1980 and 1989, state spending grew by 104 percent. In most of the states now facing the worst budget problems, spending grew even faster: by 119 percent in California; 174 percent in Connecticut; 169 percent in Florida; and 134 percent in Massachusetts.[3] Numerous programs were created during the state spending increases of the 1980s. These programs, in turn, have generated strong constituencies that now resist attempts to terminate, cut, or slow the growth of these programs.

The main reason for the large growth in state government was that tax receipts were growing very rapidly in the 1980s, so there were few fiscal or political considerations restraining spending.[4] As demonstrated by Table 1, per capita tax receipts increased from $658 to $1,147 between 1980 and 1988. Describing the Northeast's fiscal problems in 1989, Steve Moore of the Washington, D.C. based Cato Institute wrote, "The plight of the Northeast is a classic case of the ratcheting effect of government. Higher revenues trigger new spending, which quickly becomes a politically indispensable fixture of the government.[5]

States are now finding it increasingly difficult, if not impossible, to pay for the growth of state government that occurred in the 1980s. Reason: slow personal income growth and sluggish personal consumption caused by the recession has resulted in diminishing tax revenues.

A number of factors, however, are now working to slow the cycle of ever-increasing state spending and taxes. For one thing, turning to higher taxes to solve budget shortfalls can have adverse economic effects. Numerous studies in the 1980s indicated that high taxes reduced state growth rates.[7] Among other findings, the studies revealed that tax increases can have devastating impacts on a state's economy by:

During the 1980s, states with fast-rising taxes experienced slower economic growth than states that kept taxes down. A 1981 study by the Joint Economic Committee (JEC), for example, found income growth in states to be inversely related to the level of state and local tax burdens and to the amount and progressivity of income taxes in the state.[8] The inverse relationship between states' relative tax burdens and economic growth rates was confirmed in a 1988 study by A.B. Laffer Associates that examined the 1980-1986 period, and by a 1991 study by University of Dallas economist Gerald Skully.[9]

Some proponents of tax increases acknowledge the adverse economic effects of income and business tax increases, but contend that excise tax increases, on the other hand, do not damage a state's economy. Recent evidence, however, contradicts this notion. Increases in taxes on goods such as gasoline, alcoholic beverages, or cigarettes, may cause residents to cross the border into lower-tax states to buy certain goods, according to a 1992 Price Waterhouse study done for the American Legislative Exchange Council (ALEC).[10] As a result, these higher-tax states experience reductions in potential tax revenue and business growth, while lower-tax states experience increases in both.

State legislators and governors often contend that the tax increases are necessary to eliminate government red ink. The evidence, however, suggests that rather than solving long-term fiscal problems, these tax increases typically lead to increases in government spending. In a study of state budget data between 1952 and 1982, former U.S. Treasury Department economist Michael L. Marlow and Neela Manage found that "tax receipts cause expenditures at the state level of government."[11] In other words, revenue increases lead to spending increases, rather than smaller deficits

Citizen disillusionment with government and grassroots resistance to higher taxes is growing. In Connecticut, Governor Lowell Weicker had to escape via a tunnel when confronted with 65,000 angry voters who stormed the state capitol in 1991 protesting a new 4.5 percent income tax.[12] A grassroots revolt against tax increases in New Jersey led to a Republican takeover of the state Senate and House in 1991. Taxpayers also turned nine tax-raising governors out of office in 1988 and 1990.[13]

In addition, through taxpayer-sponsored state initiatives and referenda, citizens are making it increasingly difficult for politicians to continue the record level of state tax increases. In Oklahoma, voters approved in 1992 a ballot initiative requiring a three-fourths vote of the legislature to enact any future tax increase. A similar measure, this requiring a two-thirds vote, was passed overwhelmingly in Arizona in the November 1992 general election. In Colorado, the general election voters approved by 54 percent to 46 percent a citizen initiative requiring voter approval of all state and local tax increases as well as spending increases above inflation.

Also in the 1992 general election, measures calling for tax increases were defeated in Missouri, North Dakota, Oregon, Oklahoma, and California.[14] Spending-control proposals were approved in Connecticut and Rhode Island, while large public-works bond issues were defeated in California and New York.

Increasing citizen resistance to new and higher taxes, together with the documented negative economic consequences of state tax increases, is compelling politicians of both parties to seek alternatives to business-as-usual. Thus privatization, a proven alternative to higher taxes and/or deep cuts to essential services, is gaining attention as one of the most promising approaches for addressing state and local fiscal pressures.

A 1992 survey of state agencies conducted by Apogee Research and sponsored by the National Association of Comptrollers revealed that interest in privatization is gaining rapidly in the states.[15] Fully 85 percent of the 158 state agencies that responded to the survey said that they believed privatization will be a major tool to provide state services and facilities in the next decade.[16] This represents an increase of 35 percentage points in just three years.

With regard to specific service areas, over 70 percent of states responding now contract out services in corrections, health, higher education and mental health.

Over 20 percent of states responding have, or will be, preparing statewide or agency-wide privatization strategies. Three years earlier, no state reported working on such a strategy. 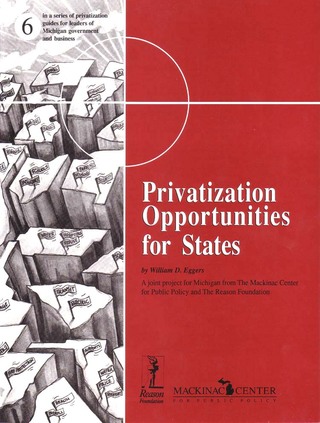